India would be aiming to repeat as well as better their performance in South Africa from the last time. Virat Kohli and his men are currently on top of the Test rankings as the Men in Blue would look forward to maintaining the successful start they have had under new head coach Rahul Dravid. 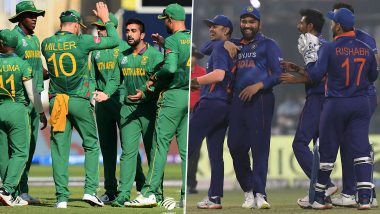 India are all set to tour South Africa for a Test and ODI series starting this December. Cricket fans from both these nations would be excited to watch stars from both sides go up against each other in what is expected to be a closely-contested series. India would be confident of their chances going into this crucial tour as they are in good form, having whitewashed New Zealand in both the T20I and Test Series played at home. South Africa too had a decent performance in the T20 World Cup last month. There were lots of doubts about the future of this series after a new COVID-19 variant Omricon emerged in Africa but the Proteas cricket board ensured their Indian counterparts that every protective measure would be taken and hence, the tour would go ahead as planned. The T20Is have been scrapped though and you can download the full schedule in PDF format, here which has all the details about the matches, venues along with timings in IST. Virat Kohli Shares His Take on Out-of-Form Ajinkya Rahane Ahead of Proteas Tour, Says, ‘Important To Back Players With Past Peformances’

India did have a good time in South Africa the last time they toured the nation back in 2017-18. They lost the Test Series 1-2 but managed to clinch the ODI and T20I series. Virat Kohli and his side are a much-improved side now as they are the number one ranked outfit in Test cricket. The Indians would also aim to repeat their success in the ODI and T20I series this time as well.

(The above story first appeared on LatestLY on Dec 07, 2021 07:08 PM IST. For more news and updates on politics, world, sports, entertainment and lifestyle, log on to our website latestly.com).