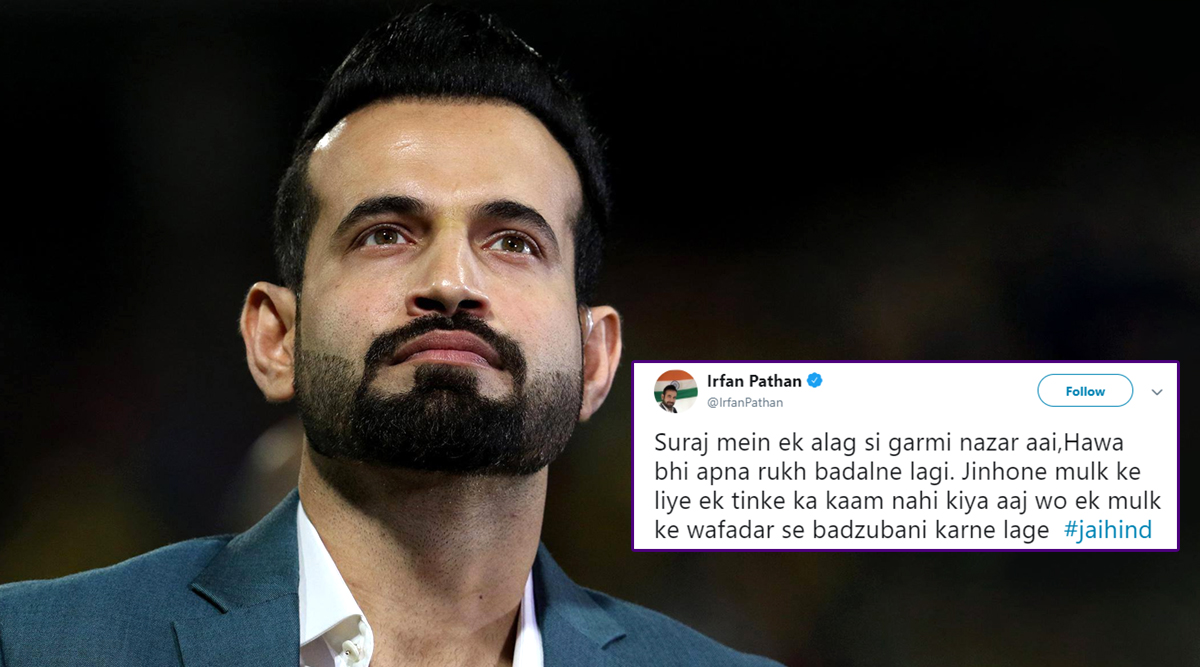 Former Team India fast bowler Irfan Pathan broke the Indian cricket fraternity’s vow of silence over the Citizenship Amendment Bill and voiced his opinion with a message on social media.  The stoic silence of the sports fraternity and the nation’s top cricketers, amidst the furore and protests over the Citizenship Amendment Act (CAA) which has put the entire nation in turmoil, has surprised the netizens especially with the Indian sportsperson’s renowned willingness to speak on various issues in the country. Protests have occurred in various parts of the country ever since the highly contentious Citizenship Amendment Bill (CAB) was passed by both the parliamentary houses and became an act after attaining the President’s signature. But the violent clashes between the Delhi police and students of the Jamia Millia Islamia University on December 15 (Sunday) further agitated the protests. Citizenship Amendment Act 2019: Court to Hear Petitions Challenging CAA on Wednesday.

And despite the shocking silence of his colleagues on the matter Pathan continued to speak on the Citizenship Amendment Bill on his social media pages. “Suraj mein ek alag si garmi nazar aai,Hawa bhi apna rukh badalne lagi. Jinhone mulk ke liye ek tinke ka kaam nahi kiya aaj wo ek mulk ke wafadar se badzubani karne lage,” wrote the 35-year-old cricketer on his twitter handle a day after siding with the Jamia Students following their clashes with the Delhi Police which left many injured and hospitalised while several others were detained.

An entire nation was gripped in fears as to what their future could hold following the enactment of the Citizenship Amendment Bill (CAB). Protests ensued in parts of the country, including in Assam, Delhi and West Bengal over the Bill. Many students took to the streets to protest against the act which aims to provide citizenship to many non-Muslim refugees from Bangladesh, Pakistan and Afghanistan but which, as per reports, could also deprive citizenship to many Muslims living in India.

With tensions building and protests turning violent across the country, netizens waited and hoped for a reaction over the matter from the country’s top sportsperson, let along cricketers, which could have provided some have provided some relief to the worried citizens and gave them hopes over future steps. But the silence of the entire sports fraternity shocked the Twitteratis with many even calling out top celebrities and cricketers and pleading with them to react on the matter.

It has been most disappointing to see the many heroes - mostly from sport - that I grew up worshipping have been absolutely silent as the country is set on fire. Some of them hold the influence to start a movement, but I guess Gods on the grass are fallible mortals outside.

It's Your City Virat Kohli! Speak Up

Oye, @imVkohli remember when you had the cheek to call something the greatest move in India's history? Where's your voice now, Virat? IT'S YOUR CITY! SPEAK UP!

When No One Wants to Speak

A cricketer with a heart, a mind, and a conscience. It would be nice if his former opening partner, a Jamia alumnus, said something too. https://t.co/XQTGr3MzZ9

U should also ask to cricketers why they r silent and atheletes👎https://t.co/xMFmiX7eMN https://t.co/lFENiirPip

This, however, wasn’t the first time Pathan took to social media to let his feelings known about the ongoing protests. Pathan, who was an instrumental part of India’s 2007 T20 Wrld Cup-winning team, had earlier expressed his concern over the well-being of the Jamia Millia Islamia students following their clash with the Delhi police. Many students from the Delhi-based central university were injured in a police lathi-charge while they were protesting against the Citizenship Amendment Act.

Irfan Pathan on the Students of Jamia Millia University

“Political blame game will go on forever but I and our country is concerned about the students of #JamiaMilia #JamiaProtest,” Pathan wrote on social media handles. This was after the Delhi police had forcefully and allegedly without permission entered the university campus and resorted to lathi-charge and tear gas shelling aimed at the students.

Earlier, Olympic medallist and six-time Boxing World Champion MC Mary Kom had declined to comment on the matter stating that her opinion did not matter. She had also voted in favour of the Citizenship Amendment Act (CAA).  "I know, the Bill is going to be passed. It’s not in my hands of course and my opinion here does not matter. If the government is supporting and everyone is supporting then I will also support it," She had told ABP News. Among the others from cricket fraternity, who willingly spoke on the CAA was Aakash Chopra.