Sunrisers started the campaign on a brilliant note with five wins on the bounce after two losses but have taken a major hit since then. KKR on the other hand, have had a season-long problem of constantly changing the team but they finally showed some clinical form, beating Mumbai Indians in their last match. 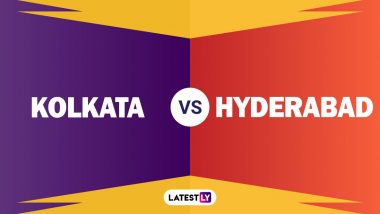 Sunrisers Hyderabad need to win all their remaining three games to make it to the play-offs this season and their stringent test starts with a tie versus the Kolkata Knight Riders. The Orange Army started the campaign on a brilliant note with five wins on the bounce but have taken a major hit since then. A flurry of defeats has left them with a mountain to climb in the fag end of the IPL. Opponents Kolkata Knight Riders’ chances of making it to the next round are now out of their hands but they will be looking to do what is feasible – win their last two matches. Kolkata Knight Riders versus Sunrisers Hyderabad will be telecasted on the Star Sports network and streamed on Hotstar from 7:30 PM IST.   IPL 2022 Points Table Updated With NRR.

KKR were impressive in their win over MI in the last match with Venkatesh Iyer in particular very good in the top order. The struggles for Ajinkya Rahane has continued into the Indian Premier League and the experienced cricketer must find a way to come out of this slump. Pat Cummins has been ruled out of the remainder of the league with a hip injury which is a massive blow for the team.

Sunrisers Hyderabad’s fortunes have dwindled ever since they lost  T Natarajan and Washington Sundar to injuries. These two players make the core member of the team and their absence has altered the game plans. Skipper Kane Williamson has endured a poor season with his strike rate in particular halting any momentum. Aiden Markram and Rahul Tripathi will be tasked with doing the bulk of the scoring.

Those unable to watch the KKR vs SRH match live on television can follow the game online. Disney+ Hotstar will be live streaming the Kolkata Knight Riders vs Sunrisers Hyderabad match online for its fans in India. Fans, however, need to subscribe to Hotstar by paying a nominal subscription fee. A must-win game for both teams calls for players to display calmness. SRH hold the edge in this match with the team possessing a more balanced batting unit.

(The above story first appeared on LatestLY on May 14, 2022 11:45 AM IST. For more news and updates on politics, world, sports, entertainment and lifestyle, log on to our website latestly.com).