KL Rahul Is Missing Cricket, Indian Batsman’s Latest Social Media Post Is All About His Love for the Game 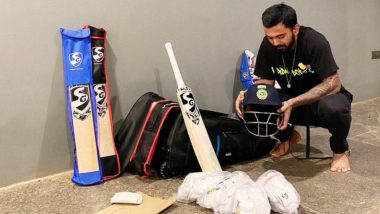 International cricket resumed following the COVID-19 break as England took on West Indies in the first of the three-match Test series. However, Indian fans continue to wait in anticipation to see their favourite players in action. There is no clear word on the future of Indian Premier League (IPL) 2020, and ICC T20 World Cup 2020 as of now and the nearest series scheduled for Men in Blue is the tour of Australia in December. Meanwhile, Kings XI Punjab (KXIP) captain KL Rahul took to his social media accounts and posted an emotional picture. KL Rahul Comes Up With an Epic Reply After Virat Kohli Tries to Troll Him Over Coffee Post.

Rahul was pictured with his cricket gears as he wrote: “I miss you.” The 28-year-old shared a similar post across Facebook, Instagram and Twitter. The right-handed batsman was last seen in action in February in One-Day International (ODI) series against New Zealand.

Rahul, who did well in limited-overs series, was not picked for Tests against New Zealand, which India lost 3-0. The right-handed batsman was then picked for three home ODIs against South Africa. The first game of the series was abandoned without a ball being bowled due to rain and later the series was cancelled due to coronavirus pandemic.

(The above story first appeared on LatestLY on Jul 13, 2020 08:58 PM IST. For more news and updates on politics, world, sports, entertainment and lifestyle, log on to our website latestly.com).