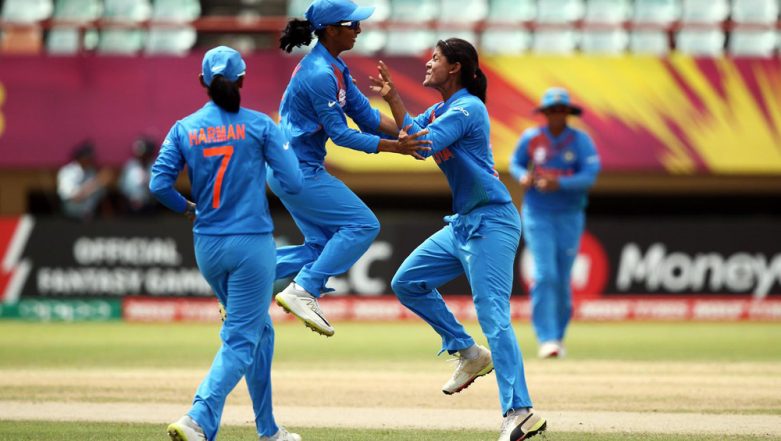 Indian women cricket team would be clashing against the Ireland team in their Group B fixture at Women’s World T20 2018 on November 15. The 13th match of the standalone Women’s T20 tournament will see the Indian eves bolstering their chances for the semi-final spot. If you are looking for the live telecast and online streaming details of IND Women vs IRE Women World T20 match, then you can find the relevant information here.

India have played two games in the tournament so far, winning in both of them. Their first match was against New Zealand where the Indian team won the match convincingly by 34 runs, riding high on Harmanpreet Kaur’s historic hundred.

In their second match, the Indian team won it comfortably by 7 wickets, this time over their arch-rival, Pakistan. With two wins in two matches, the Indian team are on the second spot of the Group B points table.

On the other hand, the Ireland women team would be eyeing their first win of the tournament. Previously, the team lost both their matches against Australia and Ireland. India vs Ireland, ICC T20 Women’s World Cup 2018: Virat Kohli Sends Words of Encouragement to Harmanpreet Kaur & Co (Watch Video).

Come Thursday, the Indian team would be looking to finalise a semi-final spot in the Women’s World T20 2018. For Ireland, the team would be striving to put up a strong show and stun the mighty Indian team. You can find the live streaming details here.

India will be playing against Ireland in another Group B match at 2018 Women’s World T20, on November 15, i.e. Thursday. The contest will take place at Providence Stadium in Guyana, West Indies with the start time scheduled to begin at 08.30 pm (IST). The toss of the match will take place at 08.00 pm (IST).

Where to Watch Live Telecast of India vs Ireland, Women’s T20 World Cup 2018, Group B Match?

Where to Get Free Live Streaming Online of India vs Ireland Women's World T20, Group B Match? (Details of Online Streaming on Hotstar)

If the viewers are not able to access the match live telecast, then they can view it through online streaming. To watch India vs Ireland match at ICC Women’s World T20, then viewers will have to view it via Star India Network’s live streaming service, i.e. Hotstar.