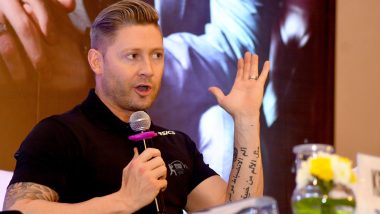 Former Australian captain Michael Clarke was diagnosed with skin cancer in 2006. But now, Clarke got it removed from his forehead and took to Instagram to share the picture. He also posted a message for the youngsters and asked them to take precautions in order to avoid the deadly disease. Michael Clarke was diagnosed with three non-melanoma lesions in 2006. In the picture shared by the former Australian skipper, we see a few stitches on his forehead and has been the ambassador of  Cancer Council since 2010. Michael Clarke Turns Entrepreneur Due to Daughter’s Ailment.

The snap shared by Clarke had an interesting message which read, "Another day, another skin cancer cut out of my face... youngsters out there make sure you are doing all the right things to protect yourself from the sun.” Ahmad Shahzad, Australian swimmer also commented on the post. "You have made me book an appointment bro! @michaelclarkeofficial," Hackett wrote. While Shahzad wrote, "Legend".

Check out the snap below:

Another day, another skin cancer cut out of my face... youngsters out there make sure you are doing all the right things to protect yourself from the sun ☀️🕶🎩

Even Ian Chappell had been diagnosed with skin cancer. The former Australian cricketer revealed the same on July 2019. “A bit of tiredness at night and a bit of skin irritation, but other than that I'm feeling pretty good," he had said after making his battle with the disease public.

(The above story first appeared on LatestLY on Sep 10, 2019 04:53 PM IST. For more news and updates on politics, world, sports, entertainment and lifestyle, log on to our website latestly.com).