Mohammed Shami Misses Late Night Chats and Dinner With MS Dhoni, Says ‘I Have a Lot of Memories About Him’ 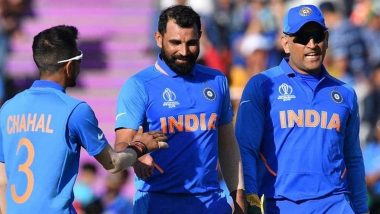 Former Indian captain MS Dhoni, who took a long a long sabbatical from cricket after the 2019 World Cup, is not just missed by his fans but his teammates too. Recently, Indian pacer Mohammed Shami recalled the gala time he used to spend with the Ranchi-born cricket off the field. The right-arm pacer talked about the legendary cricketer’s down-to-earth nature and said that Dhoni will never make an individual feel that he’s a star. Shami made his debut in all three formats under Dhoni and on many previous occasions, he has credited the wicket-keeper batsman for his success. MS Dhoni Is Addicted to PUBG These Days, He Even Talks About It During His Sleep, Says Wife Sakshi.

"I played in all the formats under him barring IPL. With regard to guidance, he will always treat his teammates in such a way that you won't even feel that he is MS Dhoni. He is such a big player. I have a lot of memories about him. Now also we think, Mahi Bhai will come and it will be fun playing," Mohammed Shami said during an Instagram chat session. MS Dhoni Gives Bike Ride to Daughter Ziva at Ranchi Farmhouse Amid ‘Crazy Lightning’ (Watch Video).

Shami also revealed that the CSK star likes to have dinner with people around him and said that he misses the late night conversations with him. "One thing I like is he (Dhoni) likes to sit with everyone and have dinner. There are always two-four people with him. We chat till late night, and these are the things that one misses," he added.

Dhoni was set to make a comeback on the field in the 2020 edition of the Indian Premier League (IPL). However, just like many other major cricket tournaments around the world the T20 extravaganza also got postponed indefinitely owing to the coronavirus scare. Nevertheless, many reports suggest that IPL 2020 can take place in October and fans will be eager to see their favourite star in action again.

(The above story first appeared on LatestLY on Jun 03, 2020 10:15 AM IST. For more news and updates on politics, world, sports, entertainment and lifestyle, log on to our website latestly.com).