The mystery surrounding Dhoni's future was put to rest temporarily on Saturday after he decided to take a two-month break and serve his army regiment after a gruelling India Premier League season and the 2019 World Cup. 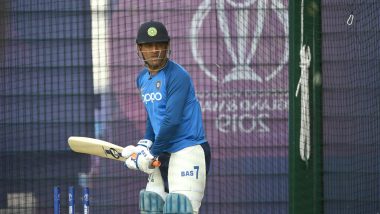 Kolkata, July 20: Mahendra Singh Dhoni is still fit to continue and if the Indian team wants the best out of him, the selectors should think of managing his workload properly, feels the former India captain's childhood coach Keshav Banerjee. MS Dhoni Makes Himself Unavailable for West Indies Tour, to Serve His Regiment.

The mystery surrounding Dhoni's future was put to rest temporarily on Saturday after he decided to take a two-month break and serve his army regiment after a gruelling India Premier League season and the 2019 World Cup. It is no secret that Dhoni had already made himself unavailable for the tour of West Indies, but he has now informed the Board of Control for Cricket in India (BCCI) that he is joining the Parachute Regiment of the Territorial Army.

"Dhoni still has cricket left in him. I know that. He is still fit enough to play international cricket," Banerjee told IANS. Since the end of the World Cup where India lost in the semi-finals to New Zealand, talks have been rife about Dhoni's retirement with selectors also reportedly not keen on assuring the 2007 World T20 and 2011 World Cup winning captain a place in the playing XI.

"I feel they (selectors) should talk to Dhoni and make things clear," Banerjee said. "I know Dhoni very well since he was a boy. Not even his best friend would know when he will retire. So I really have no idea. But he looks fit as ever and is enjoying his game. To me, he had a good World Cup and looked sharp." MS Dhoni Has No Plans to Retire as of Now, Says Friend and Business Partner Arun Pandey.

Asked about youngsters like Rishabh Pant waiting in the wings, and whether Dhoni should make way for them, Banerjee opined: "He (Pant) needs guidance and who better than Dhoni to guide him. It is my personal opinion. I don't know what BCCI will do. But if you ask me, they should manage Dhoni well from here on if they want him in the T20 World Cup as well. Dhoni does not need to play every series. That's how Rishabh Pant can also fit in." The T20 World Cup is slated to take place in Australia next year.

(The above story first appeared on LatestLY on Jul 20, 2019 04:14 PM IST. For more news and updates on politics, world, sports, entertainment and lifestyle, log on to our website latestly.com).