CSK have shared a rare video of MS Dhoni dancing. The 39-year-old is one of the most loved cricketers worldwide is quite popular for cool and calm demeanour. Dhoni is hardly seen dancing. but in a latest video shared by CSK, captain cool can be seen shaking his leg alongside his wife Sakshi and daughter Ziva. 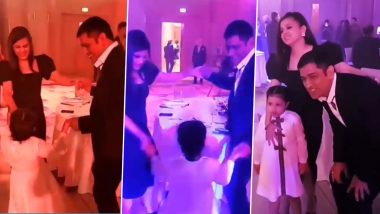 MS Dhoni is rarely seen dancing when the camera is on him. The former India and Chennai Super Kings (CSK) captain has always been popular for his calm, cool and composed demeanour and rarely looks out of place. CSK have, however, found a rare video where captain cool is seen shaking his leg alongside his wife Sakshi Dhoni and daughter Ziva. CSK, on Thursday, posted a video on their social media pages where Dhoni, Sakshi and Ziva are seen to be enjoying each other’s company and engage in a group dance. MS Dhoni Orders 2,000 Black 'Kadaknath' Chicks from Madhya Pradesh's Jhabua.

In the video, Dhoni, Sakshi and Ziva can be seen holding each other’s hands and dancing while Dhoni is also later seen dancing with his group of friends. The video is a gem and shows the other side of captain cool. The three also later pose for pictures. Sakshi and MD can be seen telling Ziva to shake her leg while the little jumps in trying to copy her parents’ moves. Take a look at the video. CSK Sensation Ruturaj Gaikwad Reacts to MS Dhoni’s Controversial ‘No Spark in Youngsters’ Statement in IPL 2020, Says ‘I Never Felt He Intended That Way’.

Dhoni, meanwhile, is currently enjoying his time with family and recently celebrated wife Sakshi’s 32nd birthday. Sakshi shared some pictures from the birthday party in which her husband and daughter Ziva can be seen present along with their other family members.

Dhoni is set to captain CSK in the next edition of the Indian Premier League as the franchise looks to rebuild and bounce back from their disappointing campaign in IPL 2020. CSK finished seventh in the points table after winning just six matches in IPL 2020 making this the first time in their history that the team failed to qualify for the IPL playoffs. The team is expected to undergo a massive overhaul in the next IPL players auction as they look to rebuild the side.

(The above story first appeared on LatestLY on Nov 26, 2020 04:42 PM IST. For more news and updates on politics, world, sports, entertainment and lifestyle, log on to our website latestly.com).