CSK captain MS Dhoni stated that he didn't see 'spark' in the youngsters after losing to Rajasthan Royals in IPL 2020. To the contrary, Gaikwad proved his mettle later in the tournament with three consecutive half-centuries. Subsequently, the CSK skipper faced a lot of backlash. However, Gaikwad cleared the air by saying that Dhoni's words were taken out of context. 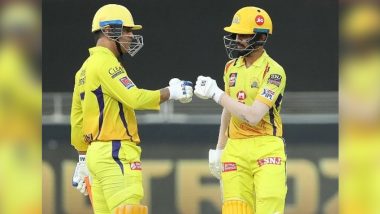 Chennai Super Kings (CSK) suffered their worst Indian Premier League (IPL) campaign in 2020 as they failed to qualify for the playoffs for the very first time. Their plans didn't work throughout the season, and their team selection came under the scanner as well. The likes of Murali Vijay and Kedar Jadhav were given chances consistently while youngsters Narayan Jagadeesan and Ruturaj Gaikwad didn't get many opportunities. Dhoni even stated that he didn't see 'spark' in the youngsters after losing against Rajasthan Royals. To the contrary, Gaikwad proved his mettle later in the tournament with three consecutive half-centuries. Subsequently, the CSK skipper faced a lot of backlash for his previous statements. CSK Skipper MS Dhoni Slammed For 'Spark' Comment About Youngsters.

However, Gaikwad believes that his statement was taken out of context. "I didn't read much into what MS had said, and I never felt he intended that way. He must have thought of something and said, but people took it the other way. What he said didn't matter to me or didn't even get to my head," Ruturaj was quoted as saying by Telegraph.

Moreover, the 23-year-old said that the former Indian captain has played a crucial role in his success. "At nets, he would advise me regarding my batting, and on top of that, he has always liked my batting," he added. "At nets, MS used to tell me, 'just make sure your process is right and don't worry about the results.' I just followed that," he said further.

Gaikwad finished the season with 204 runs in six games with an average of over 50. With mega auctions taking place ahead of IPL 2021, CSK are expected to many changes and Gaikwad is all but likely to play a crucial role.

(The above story first appeared on LatestLY on Nov 24, 2020 07:24 PM IST. For more news and updates on politics, world, sports, entertainment and lifestyle, log on to our website latestly.com).