Rahim remained unbeaten on 102 and brought up his hundred with the help of nine fours and one six. This was Rahim's seventh hundred in his ODI career. 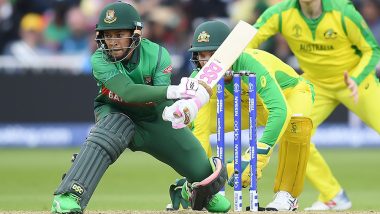 Rahim remained unbeaten on 102 and brought up his hundred with the help of nine fours and one six. This was Rahim's seventh hundred in his ODI career. Other than Rahim, Tamim Iqbal and Mahmudullah hit fifties to give Bangladesh a chance. But Australia's total of 381/5 in 50 overs proved just too much for the Tigers in the end, as they fell short by 48 runs. Australia vs Bangladesh Highlights And Cricket Score - 26th ODI match - Full Scorecard.

WATCH all the WORLD CUP 2019 Matches LIVE for Free!

Earlier, Australia's destructive opening batsman David Warner hit a scintillating 166 off 147 balls after skipper Aaron Finch won the toss and elected to bat first against Bangladesh. The Southpaw was dismissed by Soumya Sarkar. However, Warner registered the highest individual score in the ICC CWC 2019 so far.

Warner also went past Bangaldesh's Shakib Al Hasan in terms of highest number of runs in the tournament. Warner is also the leading run scorer in the ICC CWC 2019 with 447 runs to his name. After the win against Bangladesh, Australia are now at the top of the points table ahead of New Zealand, England and India. Bangladesh are on the fifth spot in the points table following this loss.

(The above story first appeared on LatestLY on Jun 20, 2019 11:53 PM IST. For more news and updates on politics, world, sports, entertainment and lifestyle, log on to our website latestly.com).