New Zealand Qualifies for T20 World Cup 2021 Semi-Finals, Check Out 3 Occasions When the Kiwis Have Proven to be a Stumbling Block for India In Test, ODI & T20I Championships 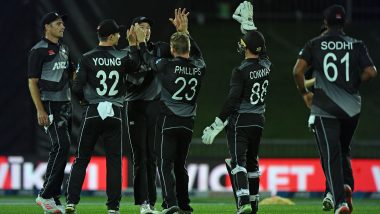 New Zealand has qualified for the T20 World Cup 2021 semi-finals of the game as they went on to beat Afghanistan by 8 wickets. With this, India's hopes for qualifying in the semi-finals of the tournament. However, this is not the first time that India's hopes have been squad by the Kiwis. New Zealand has caused a problem for India in all three formats of cricket. In the ODIs, Tests and now in the T20Is. If one may recall India had qualified for the semi-finals of the CWC 2019. NZ vs AFG Stat Highlights, T20 World Cup 2021: Kane Williamson & Co Qualifies for Semi-Finals, Team India Knocked Out of Tournament.

Hosted in England, the tournament witnessed the semi-finals game between India and New Zealand. What India needed was a win to qualify in the finals. With the target of 240 runs, India's top-order woes continued. Rishabh Pant, Ravindra Jadeja, MS Dhoni and Hardik Pandya did try to reach the target but in the end, the Kiwis walked away with the last laugh. MS Dhoni's run-out was something that the critics blamed, but the fact remains that India's top order failed to impress all of us.

Now, in the Test matches, India and New Zealand qualified for the World Test Championship 2021 finals. The team faced the Kiwis in the finals. Held at Southampton, once again New Zealand had the last laugh. Indian batsmen were unsuccessful in putting up a fair fight. The stellar batting lineup of Virat Kohli, Ajinkya Rahane, Rohit Sharma and others could not rise to the occasion and India lost the match. With this, the dream of grabbing the World Test Championship got crashed.

Now the hopes of qualifying for the semi-finals have come to a halt. So India lost a couple of games in the Group Stage at the start of the tournament. They lost to Pakistan by a huge margin on 10 wickets and then against New Zealand by 5 wickets. They needed Afghanistan to beat NZ but that didn't happen and India's dreams for qualifying into the semis crashed badly.

(The above story first appeared on LatestLY on Nov 07, 2021 09:23 PM IST. For more news and updates on politics, world, sports, entertainment and lifestyle, log on to our website latestly.com).