Ollie Pope Misses Maiden Test Hundred in England, Out for 91 During ENG vs WI 3rd Test 2020 in Manchester

Ollie Pope survived few tough chances, which included a close LBW review and a tough catching opportunity that Roston Chase failed to reach, during the course of his innings. This is also his highest individual score in England overtaking the previous best of 28 he had got against India at Lord’s in 2018. 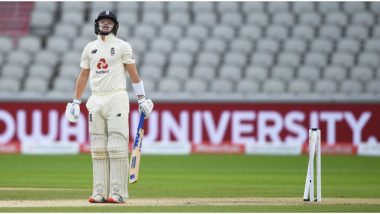 Ollie Pope missed out on a maiden Test hundred in England and a second Test century after he was out for 91 runs during the England vs West Indies 3rd Test in Manchester. The 22-year-old was dismissed for his overnight score of 91, which comprised of 11 boundaries to the fence. This could have been Pope’s second Test hundred in seven innings. He had scored his maiden Test century at Port Elizabeth against South Africa earlier this year. The young right-handed batsman, who is often compared to English great Ian Bell, had taken the hosts to safety after coming at the crease with England stuttering at 92/3 on Day 1 of the third Test. England vs West Indies Live Score of 3rd Test 2020 Day 2.

Shanon Gabriel bowled the right-hander for 91 runs from 150 deliveries. Pope had also survived a dropped catch at slips in the previous over before Gabriel ran through the gate and shattered the stumps. This was Gabriel's first Test wicket in two Test matches. he had gone the second Test without a wicket after taking nine in the first Test match. Rahkeem Cornwall Takes One-Handed Spectacular Catch to Dismiss Rory Burns During ENG vs WI 2020 3rd Test Match (Watch Video).

Pope survived few tough chances, which included a close LBW review and a tough catching opportunity that Roston Chase failed to reach, during the course of his innings. This is also his highest individual score in England overtaking the previous best of 28 he had got against India at Lord’s in 2018. He barely reached double figures in the opening two Test matches against West Indies and was clearly struggling to tackle the pace.

But with England needing one of their batsmen to go big at Old Trafford, Pope stood up and delivered. He came to the crease after Kemar Roach had gatecrashed Ben Stokes’ stumps leaving England struggling at 92/3 and shared a 30-run stand with Rory Burns before the latter was out to a brilliant catch from Rahkeem Cornwall. Jos Buttler then stepped in as England’s last recognised batsman with the hosts at 122/4 and far from a safe score.

Pope and Buttler have, however, taken England to safety with an unbeaten partnership. While registered his second Test hundred, Buttler reached his first half-century in 15 Test innings and is on course towards a big hundred. If he gets the century it will be Buttler’s first in 21 Test matches and first since his 106 against India in 2018.

(The above story first appeared on LatestLY on Jul 25, 2020 03:54 PM IST. For more news and updates on politics, world, sports, entertainment and lifestyle, log on to our website latestly.com).