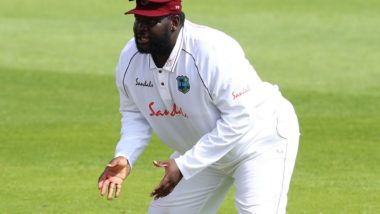 Rahkeem Cornwall took an absolute one-handed blinder to dismiss Rory Burns on the opening day of England vs West Indies 3rd Test match in Manchester. Cornwall, who is playing his first game in the series, held on to a spectacular one-handed catch off the bowling of Roston Chase to remove Burns. The English left-handed opening batsman was England’s most in-form batsman in this Test. He had already hit his seventh Test half-century and was edging towards a big score before Cornwall removed him with a sensational take. England vs West Indies Live Score Updates.

Burns was dismissed for 57 runs off 147 deliveries as England further slumped to 122/4 after being asked to bat first. Cornwall, who is quite popular for his catches in the slip cordon once again proved why, despite his weight and broad shape, he is one of West Indies’ best catchers. The incident occurred in the 48th over of England’s innings. Chase had just been introduced two overs ago and the change in the bowling attack did the trick for captain Jason Holder and his men. Salman Butt Mercilessly Trolled by Netizens for Criticising Jofra Archer over Protocol Breach.

The legend of Rahkeem Cornwall is growing by the minute - quite a catch by the big fella - #rahkeemcornwall #windiescricket #ENGvWI pic.twitter.com/q6DBUROlHM

The wicket came in the fourth delivery of 48th over. Chase, who had dismissed Burns in the last two innings in this series, bowled a flighter which Bruns looked to cut but only managed to top-edge the delivery to first slip where Cornwall held on to an excellent catch. The ball was flying at a great speed but the big man flung his right hand to grab it and then used his left hand to secure the catch.

This is the moment everyone is talking about...

What an absolute baller Rahkeem Cornwall is! https://t.co/snGvv6vHca

Chase has now dismissed Burns four times in just 40 deliveries. In the four innings that Burns has batted in this series, he has been dismissed by Chase three times, all in the last three innings. At Southampton in the first Test, he was caught by John Campbell at short leg off Chase. Then in the first innings of the second Test, he was given out LBW and caught at slip here on Friday.

Meanwhile, England are struggling at 131/4 at Tea on Day 1 of the third and final Test match of the series. Kemar Roach has been the pick of bowlers for the visitors and has taken two wickets while England captain Joe Root was run-out by Chase with a direct-hit when stealing a quick single.

Roach, who is one wicket shy of becoming the first West Indies pacer to pick 200 Test wickets in many years, removed Dominic Sibley in the opening over of the match before going through Ben Stokes’ gate in the 35th over.

(The above story first appeared on LatestLY on Jul 24, 2020 08:39 PM IST. For more news and updates on politics, world, sports, entertainment and lifestyle, log on to our website latestly.com).