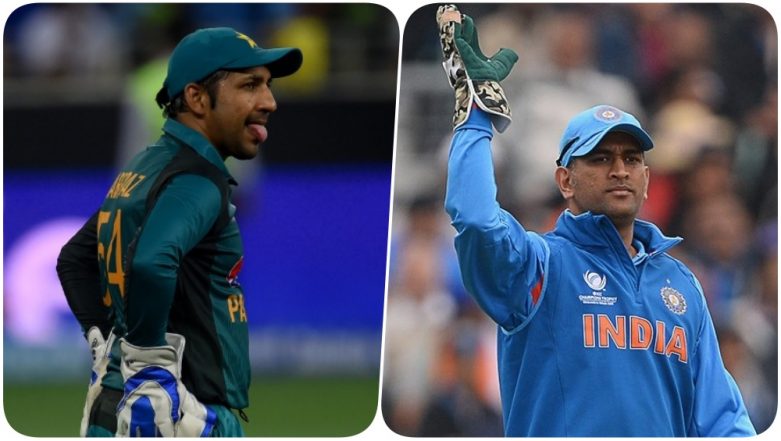 MS Dhoni’s impeccable decision-making skills and remarkable instinct has been praised by most cricket lovers and pundits. On many occasions, his decisions have proven to be the turning point of the matches. Like the last time when Dhoni suggested a change in the field to Rohit Sharma during India’s game with Bangladesh in the ongoing Asia Cup 2018, it resulted into the wicket of Shakib Al Hasan. Now, Pakistani captain Sarfaraz Ahmed tried emulating Dhoni yesterday, while playing against Bangladesh by suggesting a change in the field. BAN Outplay PAK to Set Up Finals Clash With India.

Little did the Pakistani captain know that the side would not be rewarded with a wicket but instead will fail so miserably! Sarfaraz removed the slip fielder while their pacer Hasan Ali was handling the bowling duties. Instead of getting a wicket, the batsman hit exactly at the slips and at the same place where the man was positioned earlier. Check out the video of the incident below:

Here’s the video of the former skipper of India suggesting a change.

There are many reasons why Thala MS Dhoni will always remain the Boss till he plays, here is just one. pic.twitter.com/skgd2ybrIP

Talking about the match yesterday, Bangladesh defeated Pakistan by 37 runs and have been knocked out of the Asia Cup 2018. In the post-match conference, Sarfaraz Ahmed admitted that his captaincy had been poor and there were many setbacks the team faced during the tournament. “We are obviously not feeling good. As a team, we have not done well. Our performance has been very poor. As a player, I have done really badly too. I should have done better. We were poor in every facet of the game. There were a lot of batting collapses for us in the tournament," said Sarfaraz Ahmed.