Pakistan vs South Africa 2018–19: Injured Haris Sohail Claims He Was Under Spell of Black Magic

Upon returning from South Africa, Haris Sohail has revealed that due to the black magic he received the injury. 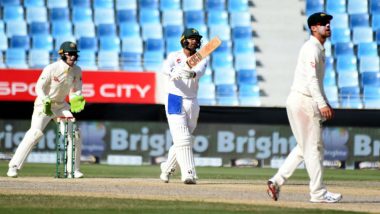 Injured Pakistan middle-order batsman Haris Sohail has claimed that he was under the spell of black magic which forced him to return to the country from South Africa. Following a knee injury, Haris was left out of the playing XI for the first Test. Subsequently, he was deemed unfit for the whole tour and had to fly back home.

Upon returning, Haris has revealed that due to the black magic he received the injury. “Haris first told the management before returning home about his fear, and then, instead of joining rehabilitation camp on return, he went to his hometown Sialkot, citing the same reason,” a BOL News report claimed. Pakistan PM Imran Khan Congratulates Virat Kohli and Co After India’s Maiden Test Series Win in Australia

Interestingly this is not the first time Haris has claimed intrusion of supernatural forces. During Pakistan's tour of New Zealand 2015, Harris claimed supernatural forces’ had compelled him to change his hotel room. Later, he suffered from an injury and was sent back home from the tour.

Meanwhile, Pakistan lost the second Test at Cape Town and with it the three-match series as well. The visitors came into the second Test after losing the first one inside three days. The third and last Test now becomes inconsequential and will take place on January 11 at Johannesburg. After the Test series, the teams will lock horns in five-match One-Day International (ODI) series and three T20 Internationals.

(The above story first appeared on LatestLY on Jan 08, 2019 04:43 PM IST. For more news and updates on politics, world, sports, entertainment and lifestyle, log on to our website latestly.com).