Pakistan vs Sri Lanka, 1st Test 2019: Babar Azam, Dinesh Chandimal & Other Key Players to Watch Out For in Historic Test 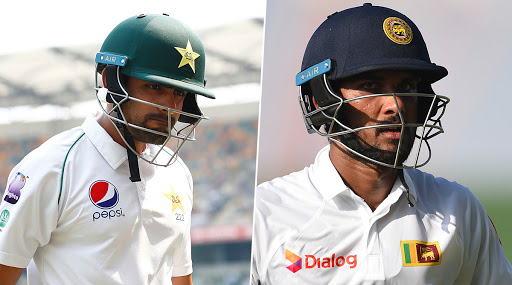 Test cricket is set to return in Pakistan after a decade and the visiting team is Sri Lanka. The first game of the two-match Test series will be played at Rawalpindi Cricket Stadium from December 11, 2019. This series will count towards the inaugural ICC Test Championship and 120 points are on offer which the home side are desperately in need of. Pakistan were clean-swept 2-0 by Australia in their recent assignment in whites. Sri Lanka, on the other hand, gave a good account of themselves in their recent Test series against New Zealand which ended 1-1. Before this historic clash, we take a look at the key players from both the teams. Pakistan Vs Sri Lanka, Cricket Score 1st Test Match.

Sri Lanka won the last Test series between the teams, handing Pakistan a rare defeat in UAE. The hosts lost the first game as they couldn’t chase down a target of 136 while in the second test, a first-innings 196 from Dimuth Karunaratne helped Sri Lanka to a 68-run win. The two sides met each other earlier in the year for a three-match ODI and T20I series. Pakistan won the ODI series 2-0 while Sri Lanka came back strong in the shortest format and won it 3-0. Pakistan have recalled Fawad Alam and Usman Shinwari to add some experience to the squad. Sri Lanka will have a virtually full-strength team as Angelo Mathews and Dinesh Chandimal have agreed to travel with the team. Pakistan vs Sri Lanka Test Series 2019: Hasan Ali Ruled Out of Two Home Tests Against SL Due to Rib Fracture.

Babar Azam is arguably the best batsman in the Pakistani side and was one of the very few players who performed well in the series against Australia. In 2019, the 25-year-old averages over 40 and has a hundred and two half-centuries to his name. The right-handed batsmen will take confidence from his performance in Australia and will look to make a statement in his first Test match in Pakistan.

Chandimal is back in the Sri Lankan side after being dropped for a dip in form. The right-handed batsmen is the most reliable wicket-keeper from either side in the series. The 30-year-old averages 41.9 in 53 Test matches with 11 tons and 17 half-centuries. He has one century and four fifties against Pakistan in Tests and will look to build on that.

Yasir Shah had a contrasting series against Australia as the right-arm spinner failed to impress with the ball but was exceptional with the bat in his hand. In the second game, the 33-year-old scored his first-ever Test century as he saved Pakistan’s blushes. The star spinner would be eager to perform well in this series and help his side to a historic win.

The left-handed opener is one of the most influential players in the Sri Lankan side. During the previous Test meeting between the teams, he was the game-changer as his 196 in the first innings of the second Test helped then to win the series 2-0. The 31-year-old will be looking for a similar kind of performance this time out as well.

Both teams are evenly balanced but Sri Lanka will have the upper hand considering their recent form. Sri Lanka defeated South Africa 2-0 as visitors and drew against the Kiwis at home, so they will be confident going into this match. The onus will be on the hosts to perform well as the pressure from the crowd at home does not bode well with their recent struggles.