The seventh season of Pro Kabaddi League 2019 has entered its climax as the top six teams are ready to battle each other in the playoffs. After 132 aggressive clashes in PKL 2019, six teams have earned a chance to lift the PKL 2019 title. As the tournament enters the final stage, here we look at five underperformers in PKL 2019. 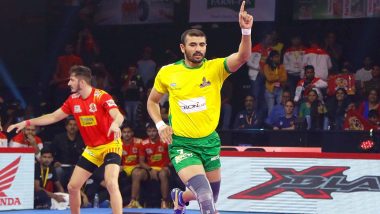 The seventh season of Pro Kabaddi League 2019 has entered its climax as the top six teams are ready to battle against each other in the playoffs. After 132 aggressive clashes in PKL 2019, six teams have earned a chance to lift the PKL 2019 title. Dabang Delhi, Bengal Warriors, UP Yoddha, U Mumba, Haryana Steelers and Bengaluru Bulls are the six teams who are part of the finale race. In a shocker, former two-time finalists Gujarat Fortunegiants could not enter the playoffs. As the tournament enters the final stage, here we look at five underperformers in PKL 2019. PKL 2019 Points Table Updated: Dabang Delhi Finish As Top Team in Latest Team Standings Ahead of Playoffs, Bengal Warriors Move Down to 2nd Spot.

Jaipur Pink Panthers, who once held the top spot in PKL 2019 points table, could not qualify for playoffs as well. Jaipur started their PKL 2019 journey with 4 consecutive wins, however, they finished on the 7th spot in the final team standings. Patna Pirates were another team which accounted for poor performance this time. Although Patna’s captain Pardeep Narwal kept his performance high with 234 raid points, Patna lost the finale race due to 13 losses in 22 matches. Patna finished on the 8th position in the points table. Below are five players who failed to shine in VIVO Pro Kabaddi League 7.  PKL 2019 Full Squad: Players’ List of 12 Teams in VIVO Pro Kabaddi League 2019.

Tamil Thalaivas' captain Ajay Thakur is one such player who suffered from his poor performance in PKL 2019. Thakur, who bagged 203 points in raiding in PKL 2018, could only earn 58 points in PKL 2019. He was also dropped in many matches due to his poor show and appeared in only 13 games. His successful raid percentage also fell to 33 per cent from last season's rate of 52 per cent.

Gujarat Fortunegiants's defender Parvesh Bhainswal also suffered from a lump in his form in PKL 2019. Bhainswal was leading defender for Gujarat in last year's edition. He bagged 86 points in PKL 2018 and was the second-most successful defender. In PKL 2019, he could only get 55 points. He was not even among the top 10 defenders this season.

Tamil Thalaivas’ Manjeet Chhillar impressed everyone with 59 points in 19 matches in PKL 2019, however, the all-rounder could not keep pace in his performance this time. In PKL 2019, Chhillar could only earn 37 points in tackling. In overall points, his stats fell to 41 in PKL 2019 from 67 in PKL 2018.

While Monu Goyat’s performance did not affect UP Yoddha’s entry in PKL 2019 playoffs, Ajay Thakur, Manjeet Chhillar and Parvesh Bhainswal’s performance took a big toll on their respective teams. With the inclusion of Rahul Chaudhary, Tamil Thalaivas were expected to come out stronger this season. Although Rahul performed brilliantly, Ajay Thakur’s and Manjeet Chhillar’s poor show effected Tamil Thalaivas. The team finished on the last spot in PKL 2019 points table. Similarly, Gujarat Fortunegiants suffered due to Parvesh Bhainswal’s comparatively incompetent performance in PKL 2019.

(The above story first appeared on LatestLY on Oct 14, 2019 08:13 PM IST. For more news and updates on politics, world, sports, entertainment and lifestyle, log on to our website latestly.com).