“I am delighted to confirm that I will represent Lahore Qalandars in front of our home crowds on 9 and 10 March, during the HBL PSL 2019,” de Villiers said. 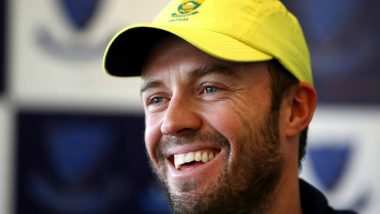 AB de Villiers has given a reason to cheer for dejected cricket fans in Pakistan. The former South African cricket star has announced that he will travel to Pakistan for Lahore Qalandars’ back-to-back matches at the iconic Gaddafi Stadium in Lahore in March this year. De Villiers will be making his Pakistan Super League debut after he was snapped by Lahore Qalandars franchise.

“I am delighted to confirm that I will represent Lahore Qalandars in front of our home crowds on 9 and 10 March, during the HBL PSL 2019,” de Villiers was quoted as saying by the official site of PSL T20. PSL 2019 Complete Squads: Full Players List of All Pakistan Super League T20 Teams

“I look forward to revisiting the Gaddafi Stadium and aim to play my part in helping Lahore Qalandars achieve something they have been aspiring for since the inception of this tournament in 2016,” he added.

“I sympathise with the people of Pakistan because they have been cricket-starved for no fault of theirs, but I am optimistic that the days are not too far when international cricket will return to Pakistan and the stadia will once again be packed with crowds,” he added.

The former cricketer also revealed that he will be till the last group stage game of PSL 2019. “Due to prior family commitments, I will only be available till the last group stage game. I want to thank Lahore Qalandars for giving me an opportunity to represent them and I look forward to not only enjoying my time in the HBL PSL 2019 but also contributing in making it a stronger brand,” de Villiers said.

PSL 2019 kicks-off on February 14 in Dubai with Lahore Qalandars taking on Islamabad United. The PSL 2019 will be a 32-day affair and will feature 34 matches including the final at Karachi’s historic National Stadium on March 17.

(The above story first appeared on LatestLY on Jan 14, 2019 01:18 PM IST. For more news and updates on politics, world, sports, entertainment and lifestyle, log on to our website latestly.com).