Shoaib Akhtar Questions Pakistan Squad Selection for Test Series Against England, Says ‘They Have Zero Idea What They Are Going to Do’ 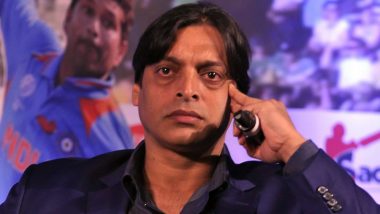 Pakistan is all set to play three-game Test series against England and ahead of the series which start from August 5, 2020. Former Pakistani bowler Shoaib Akhtar has slammed the selection process of the team and said that the squad has no idea of what they will do. During a talk show, he gave the probable playing XI but refused to give his take and instead took a dig at the Pakistani team management. He went on to say that out of the 29 player squad, 22 of them are fast bowlers and said that he doesn’t know the kind of a mindset that the team would go by. ENG vs PAK 2020: Pakistan Bowlers to Struggle More in England Due to Saliva Ban, Says Junaid Khan.

They have announced a 20-member squad. In those twenty, there are around 22 fast bowlers. Let us see whom they select. Depends on the captain and the management, with which mindset they go in," said Akhtar on Geo Cricket. He also went on to emphasise that only when the final list of the team is released will they know the exact mindset of the players. Akhtar was not sure that if Pakistani team also had any intention of winning the match or simply ending the same with a draw.

(The above story first appeared on LatestLY on Jul 29, 2020 10:34 PM IST. For more news and updates on politics, world, sports, entertainment and lifestyle, log on to our website latestly.com).