SRH vs PBKS IPL 2022 Dream11 Team: Rahul Tripathi, Umran Malik and Other Key Players You Must Pick in Your Fantasy Playing XI

Meanwhile, Punjab Kings (PBKS) also couldn't prove much in the season and were knocked out from the contest for play-offs recently. As the teams meet on Sunday for a final face-off of IPL 2022, we have picked some players you can pick for your SRH vs PBKS Dream11 fantasy team. 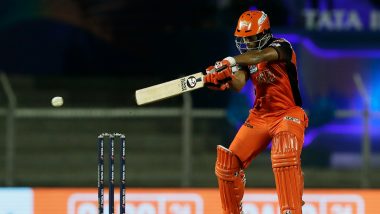 Sunrisers Hyderabad (SRH) will take on Punjab Kings (PBKS) in their last match of the IPL 2022 season on Sunday. The two teams are already out of the playoff race and the impact of the outcome of the game won't hurt the sides. SRH have had an ambiguous season who at one point looked favourites for play-offs initially and later lost the momentum and got dropped out of the contest. Meanwhile, Punjab Kings (PBKS) also couldn't prove much in the season and were knocked out from the contest for play-offs recently. As the teams meet on Sunday for a final face-off of IPL 2022, we have picked some players you can pick for your SRH vs PBKS Dream11 fantasy team. SRH vs PBKS, IPL 2022 Live Cricket Streaming: Watch Free Telecast of Sunrisers Hyderabad vs Punjab Kings on Star Sports and Disney+ Hotstar Online.

After being promoted up the order in a match against Mumbai Indians (MI) on Tuesday, Priyam Garg availed the opportunity and scored a handful of runs to aid his team in putting up a tremendous total of 193 runs.The right-handed batter will be among the players to watch out for as Sunrisers Hyderabad (SRH) take on Punjab Kings (PBKS) in match 70 of IPL 2022 on Sunday.

He had a wonderful IPL season and has been scoring runs consistently. Rahul Tripathi scored his highest 76 off 44 balls against Mumbai Indians (MI) in their previous match on Tuesday to lead his team to a reasonable total of 193 runs. He is definitely among the favourites to watch out for as SRH takes on PBKS on Sunday. IPL 2022 Playoffs Schedule, Who Plays Who? Match Timings, Venues and Teams for Qualifier 1, Qualifier 2 and Eliminator.

The right-arm fast bowler Umran Malik's consistent performance in IPL 2022 has led him on selection radar for the South Africa series. Umran Malik in the last match of SRH against Mumbai Indians crushed the top order by taking three wickets in four overs and conceded just 20 runs. He is among the top players from the match between SRH and PBKS to watch out for on Sunday.

He managed to gun down three important wickets of Delhi Capitals (DC) in their previous match on Monday to restrict the opposition on a low total. Apart from bowling, Liam Livingstone has been phenomenal with the bat as well in IPL 2022 and will be among the top players to watch out for as PBKS face SRH in their last group stage match on Sunday.

After the early fall of wickets, Jitesh Sharma from Punjab Kings steadied the innings against DC on Monday to try his hands on getting near to the required score, though in vain. He was the top run-scorer from Punjab Kings and scored 44 off 34 balls. Jitesh Sharma from PBKS will be among the players to watch out for in the match against SRH on Sunday.

(The above story first appeared on LatestLY on May 22, 2022 12:45 PM IST. For more news and updates on politics, world, sports, entertainment and lifestyle, log on to our website latestly.com).