Steve Smith and David Warner didn’t receive any derogatory comments from the Indian players during the game. However, the spectators in the jam-packed stadium didn’t hold back and booed Smith over the saga. Well, the Indian captain wasn’t amused with the crowd’s behaviour as he asked them to stop booing the Aussie batsman and clap for him. 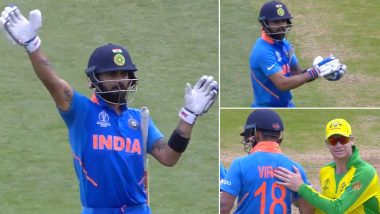 Virat Kohli and Steve Smith are two of the best batsman in the modern era and their record in international cricket is nothing but jaw-dropping. However, the two talismanic batsmen also share a history together. On many occasions, the two batting greats got involved in a heated argument on the field and they even attacked each other in press conferences. However, on exact this day, June 8, Kohli, amid all his differences, saved Smith from the booing crowd during the 2019 World Cup match between India and Australia at The Oval. ICC Awards 2019: Virat Kohli Wins 2019 Spirit Of Cricket Award.

Smith, alongside David Warner, was playing his first International tournament after serving a one-year ban for getting involved in the infamous ball-tampering scandal in 2018. Though the two Aussie players didn’t receive any derogatory comments from the Indian players during the game. However, the spectators in the jam-packed stadium didn’t hold back and booed Smith over the saga. Well, the Indian captain wasn’t amused with the crowd’s behaviour as he asked them to stop booing the Aussie batsman and clap for him. Smith was also touched by Kohli’s heartwarming gesture as he thanked the top-ranked ODI batsman.

In the post-match press conference, the Indian captain called the spectator’s behaviour ‘unacceptable’ and said that it’s not good seeing someone down like this. "What happened, happened long back. He's back, trying to play well for his side. It is not good to see someone down like that. You don't want to see a guy feeling heat every time he goes out to play," said Kohli.

"I just felt for him and I told him sorry on behalf of the crowd because I have seen that happen in a few earlier games as well. In my opinion, that's not acceptable," he added. Kohli’s magnificent display of sportsmanship was appreciated by one and all and he even earned him the 'ICC Spirit of Cricket' award.

Talking about the game, the Men in Blue posted 352/5 courtesy century from opener Shikhar Dhawan and crucial 82 runs by Kohli. In reply, the Men in Yellow tried to make a fight back as the likes of David Warner, Steve Smith and Alex Carey scored half-centuries. However, the total proved to be too much as Australia were bundled out for 316 and lost the game by 36 runs.

(The above story first appeared on LatestLY on Jun 09, 2020 01:21 PM IST. For more news and updates on politics, world, sports, entertainment and lifestyle, log on to our website latestly.com).