The Netherlands women's hockey team has decided not to travel to India for their upcoming double-header in FIH Pro League against the Indian women's team at Bhubaneswar, Odisha, on February 19 and 20. 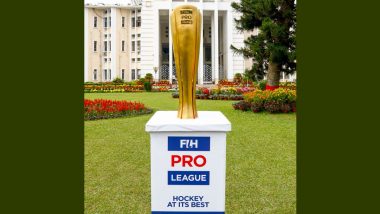 New Delhi, Feb 10: The Netherlands women's hockey team has decided not to travel to India for their upcoming double-header in FIH Pro League against the Indian women's team at Bhubaneswar, Odisha, on February 19 and 20.

The Netherlands team has cited negative inter-continental travel advice received from KNHB (Royal Dutch Hockey Association) Medical Committee and the NOC medical staff for their decision to cancel their travel to India for the matches, the Hockey India has informed in a release on Thursday.

Commenting on the Netherlands' decision, Hockey India President Gyanendro Ningombam said, "Hockey India is quite surprised by the Netherlands' decision to cancel their trip to India for the doubleheader FIH Women's Hockey Pro League which was scheduled for 19th and 20th February in Bhubaneswar owing to the negative medical report given by the KNHB medical committee."

"With Covid positivity rate in India falling to less than five per cent, we were confident of successfully hosting the matches in a secure bio bubble similar to that of the FIH Hockey Men's Junior World Cup held at the same venue just three months ago where 16 teams participated," he added.

Hockey India is currently in contact with FIH regarding the implications of the decision of the Netherlands team to not come to India for these two previously agreed matches scheduled for next week, the release said.

Incidentally, the Netherlands men's team is currently in South Africa for the FIH Pro League matches against South Africa and France. The new variant of Novel Coronavirus, Omicron was first reported from South Africa.

(The above story first appeared on LatestLY on Feb 10, 2022 09:32 PM IST. For more news and updates on politics, world, sports, entertainment and lifestyle, log on to our website latestly.com).