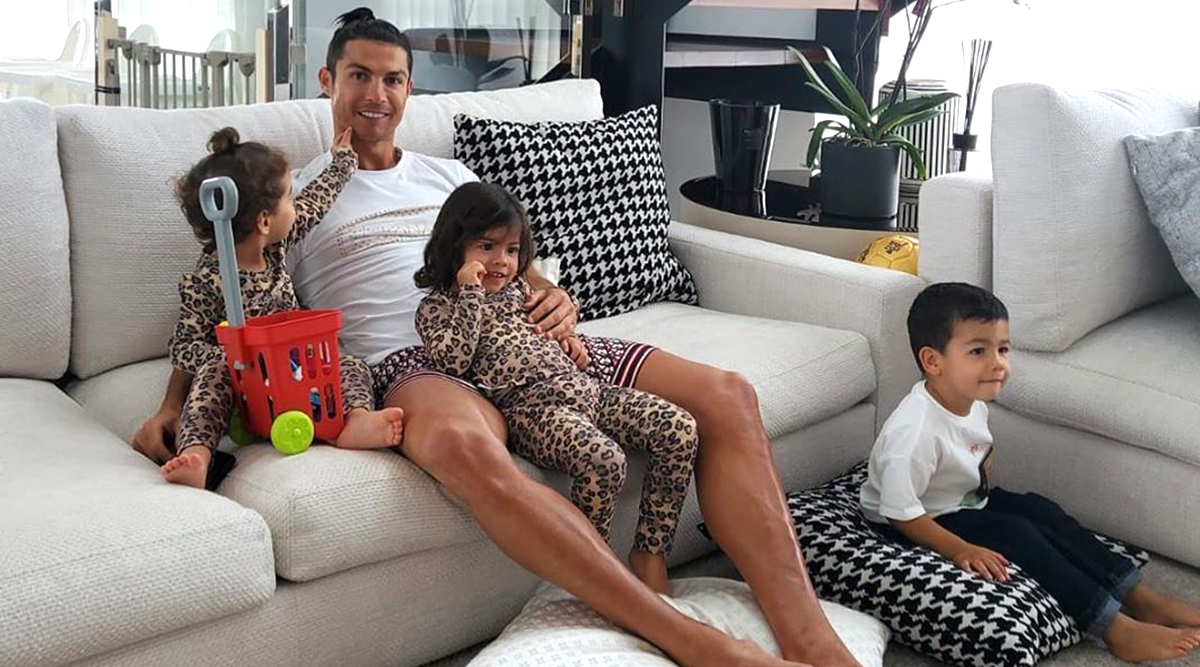 With no football action on the cards for the foreseeable future, Juventus star man Cristiano Ronaldo is currently in his home at Madeira where he is in isolation with girlfriend Georgina Rodriguez, his kids, mom Dolores and the rest of the family. The house is an astonishing seven-storey building in Funchal, Madeira and was just finished last year. It is reported that the former Real Madrid superstar spent close to £7 million on his dream house. Cristiano Ronaldo Spotted Wearing an iPod Shuffle Ahead of Juventus’ Serie A 2019–20 Clash With Cagliari.

Cristiano Ronaldo’s lavish mansion in his hometown is every bit of a dream house that you come to expect from one of the richest athletes on the planet. The house has an incredible sea view along with two Olympic-sized pools, Jacuzzi and of course a football pitch. In this article, we take a look at Cristiano Ronaldo’s incredible house in Madeira. Cristiano Ronaldo Flaunts Rolex GMT-Master Ice, Half a Million Dollar Luxury Watch! View Pic.

Ronaldo With His Kids

In this difficult moment for the whole world, let’s be thankful for the things that matter - our health, our family, our loved ones. Stay home and let’s help all the health workers out there fighting to save lives.🙏🏽❤️🌈 #stayhomesavelives

The Juventus forwards house was built from scratch as he bought the building from local designer Nini Andrade Silva for an undisclosed amount in 2015. Before that, the building housed a famous night club named Bar/Club Noir and turned it into his lavish property. In 2019, the construction was completed and Ronaldo moved in with his mom and brother Hugo, who also manages the CR7 museum. Cristiano Ronaldo Shares Video of Him and Girlfriend Georgina Rodriguez Exercising Together During Lockdown.

Cristiano With His Family

Funny moment with my babies 😀❤️

One of the two swimming pools is located on the rooftop, where Ronaldo was spotted a couple of times during self-quarantine. There are two gyms, in which the Portuguese has posted a couple of photos of him working out and there is a football pitch where he trains with Ronaldo Jr. It is understood that the garage is underground and can accommodate five cars.

A view of the Garden

Cristiano Ronaldo was given special permission by Juventus to go to Madeira after his mother had had a stroke and since footballing competition are on a hold due to the coronavirus pandemic, the star striker is keeping himself in isolation at his home along with the family.

However, with Cristiano Ronaldo now based in Italy, this house serves as a holiday home to where he comes during his vacations to enjoy some time away from football and get some well-deserved rest.