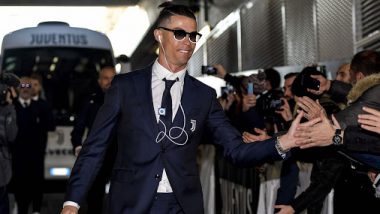 We are a week into the New Year and Cristiano Ronaldo is already bringing back a sense of nostalgia. The Portuguese forward was spotted wearing a year-old iPod shuffle ahead of Juventus’ Serie A clash with Cagliari on Monday in Turin. This device was first launched by Apple in 2005 and the latest edition was released back in 2010. This device hasn’t been updated in almost eight years as Apple stopped its production and discontinued it in 2017. Cristiano Ronaldo fans were impressed by this fashion statement by the 34-year-old and they reacted to his outdated device with shock and amusement. Cristiano Ronaldo Flaunts Rolex GMT-Master Ice, Half a Million Dollar Luxury Watch! View Pic.

Ahead of Juventus’ clash with Cagliari, Cristiano Ronaldo greeted his fans with a 4th-generation iPod shuffle, a device which hasn’t been updated since 2010 and which was discontinued by Apple in 2017. The Juve forward was earlier spotted with a Rolex GMT-Master Ice which costs around 485,250 dollars and now sporting an iPod shuffle from the 2010s clearly shows that Ronaldo likes his gadgets to be a little out of the ordinary. The 34-year-old didn’t only impress his fans off the field but on-field as well, as the Portuguese national team captain scored a brilliant hat-trick in his sides 4-0 triumph while also setting up a goal for Gonzalo Higuain. Cristiano Ronaldo Scripts History After His Hat-Trick Against Cagliari.

Cristiano Ronaldo will next be in action on January 12, 2020 (Sunday) when Juventus travel to play fourth-placed Roma in a Serie A encounter. It will be interesting to see if the former Real Madrid star comes with another unique gadget to impress his admirers from around the world.

(The above story first appeared on LatestLY on Jan 08, 2020 10:49 PM IST. For more news and updates on politics, world, sports, entertainment and lifestyle, log on to our website latestly.com).