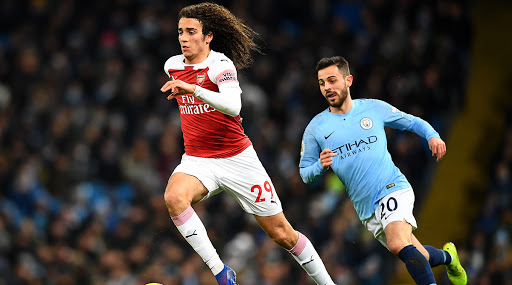 Arsenal vs Manchester City, Premier League 2019-20 Free Live Streaming Online and Live Telecast: The marquee fixture of this weekend's EPL clash takes us to the Emirates Stadium where Arsenal take on Manchester City. Freddie Ljungberg was relieved to see his side come from behind to beat West Ham United 1-3 but know City are at a different level altogether. The defending champions were dealt a blow by Manchester United in their last game which has severely dented their title hopes. A win against Arsenal might not do much in terms of closing the gap but will lift their confidence going into a busy festive period. Fans looking for live streaming details of Arsenal vs Manchester City, Premier League clash can scroll down below. Premier League 2019-20 Result: Chelsea Suffer Shock 1-0 Defeat Against Bournemouth.

Nicolas Pepe and Hector Bellerin will undergo a late fitness test in order to take part in the City game. Gabriel Martinelli scored in the previous game against West Ham United and the youngster could find himself in the starting eleven again. Despite being heavily criticised for his lack of industry on the pitch, Mesut Ozil is a certain starter for the Gunners. David Luiz and Sokratis at the back do not look convincing but lack of alternatives means Ljungberg will stick to the duo. Paul Pogba Transfer Update: Manchester United Midfielder Not Keen on January Transfer Move.

Ederson is down with illness but should recover in time for the contest. David Silva is a huge doubt for the clash due to a knee injury and could be replaced by Phil Foden in the team. Gabriel Jesus has struggled for form ever since featuring regularly for City as an alternative for the injured Sergio Aguero. He needs to improve his link-up play with Raheem Sterling and Riyad Mahrez to get Manchester City back dominating again.

Arsenal vs Manchester City Premier League 2019-20 clash will be played on December 15, 2019 (Sunday) at the Emirates Stadium. ARS vs MCI is scheduled to start at 10:00 pm IST (Indian Standard Time).

Where to Watch the Live Telecast of Arsenal vs Manchester City, Premier League 2019/20 Season Football Match? TV Channels in India

Arsenal vs Manchester City game will be streamed live by Hotstar as it is the official streaming partner of Premier League 2019-20. Meanwhile, football fans can follow LatestLY for ARS vs MCI match updates.

Manchester City have been poor in the last few weeks and them dropping points again should not be a surprise.