The Mariners currently have a favourable head-to-head record, winning both the matches that they have played against Odisha FC. Continue reading to get live streaming and telecast details of the game. 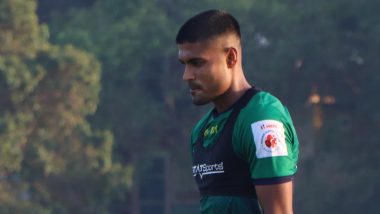 ATK Mohun Bagan would take on Odisha FC in an Indian Super League 2021-22 encounter at the Fatorda Stadium on Sunday, January 23. The match is set to begin at 7:30 pm IST (Indian Standard Time). This was one of the few clashes that had to be postponed in the ISL due to a COVID-19 outbreak within the Mariners' camp. Juan Ferrando's side would be in action after 18 days with their last appearance coming in a 2-2 draw against Hyderabad FC. David Williams had set an ISL record for scoring the fastest goal of the competition and Ferrando would want his side to come together and put in a complete performance after a long gap, especially when a spot in the top-four is in contention. Subhash Bhowmick, Former India Footballer and Coach, Passes Away

The winner of this clash would enter the top four in the Indian Super League 2021-22 points table and the stakes could not be much higher at this stage of the competition. Odisha (16) have a point more than the Mariners (15), having played two games more. Kino Garcia's side have won two of their last five matches while ATK Mohun Bagan are undefeated in the same number of games. Let us have a look at the live streaming details of this fixture.

The ATK Mohun Bagan vs Odisha FC match in ISL 2021-22 will be played at the Fatorda Stadium in Margao. The match will take place on January 23, 2022 (Sunday) and it is scheduled to begin at 09:30 pm IST (Indian Standard Time).

Fans can also watch ATK Mohun Bagan vs Odisha FC match online. Since Star Sports network is the official broadcaster of ISL 2021-22, Disney+Hotstar will be live streaming the ATKMB vs OFC clash online for fans. JIO and Airtel subscribers can also follow the match on JIO TV and XStream.

(The above story first appeared on LatestLY on Jan 23, 2022 06:50 PM IST. For more news and updates on politics, world, sports, entertainment and lifestyle, log on to our website latestly.com).