Colombia Squad for 2018 FIFA World Cup in Russia: Lineup, Team Details, Road to Qualification & Players to Watch Out for in Football WC

Colombia begins their FIFA World Cup 2018 campaign against Japan on June 19 followed by Poland on June 24 and Senegal on June 28 in the remaining league-stage matches. 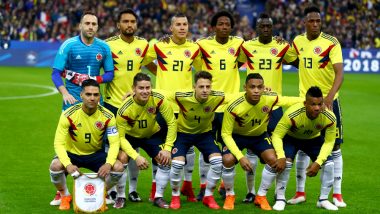 Colombia had an exceptional last World Cup where they reached the quarter-finals and captured the imagination of an entire nation back home. The success was mainly on the back of some fine performances by star midfielder James Rodriguez whose goal against Uruguay is still fresh in the minds of the fans. Hence, there is a certain level of expectation from all quarters for Colombia to do well in the FIFA World Cup 2018 in Russia and their experienced coach Jose Pekerman knows all about the pressure of such big tournaments. FIFA World Cup 2018 Schedule in IST for PDF Download: Fixtures, Groups, Time Table with Match Timings & Venue Details of Football WC in Russia.

A lot has changed since the World Cup in 2014 with Colombia sporting an entire new back line with Yerry Mina, Oscar Murillo and Davison Sanchez leading the defensive line. The retirement of Mario Yepes means his experience will certainly be missed, but Cristian Zapata is set for another shot at the World Cup. Arsenal’s reserve keeper David Ospina is undoubtedly the No 1 in the Colombian lineup and a series of outings in the later part of the season means he has found match sharpness.

The bulk of the attacking part will be carried out by James Rodriguez and Juan Cuadrado who have the task of opening up the opposition defenses. Although, Pekerman also has Carlos Sanchez of Fiorentina to fall upon if things are not particularly going well. With Colombia playing with a system consisting of a lone striker, national icon Radamel Falcao will be under the spotlight to deliver.

Colombia finished fourth in the South American World Cup qualifiers with 27 points and securing the last automatic World Cup berth. They were separated from Peru by a margin of 1 point who played the inter-continental qualifiers. James Rodriguez was the top scorer for Colombia with six goals in a campaign where Colombia managed seven wins.

After a great opening three matches in the group stage against Japan, Greece and Ivory Coast where they coasted to fine victories they defeated a strong Uruguay side 2-0 in the round of 16. Their World Cup ended when Brazil knocked them out 2-1 in a game famous for Neymar’s injury.

Radamel Falcao: ‘El Tigre’ as he is popularly known as back home, has found his mojo back again after disastrous spells with Chelsea and Manchester United in England. With Monaco, he reminds us of his peak days again and will be edging to find the back of the net for his nation.

James Rodriguez: It is safe to say that the Bayern Munich play-maker makes this team tick and after the torrid times under Zinedine Zidane in Real Madrid, he is back to his best in Germany. A lot depends on him as his staggering work rate and attacking prowess makes him one of the most lethal players in Russia.

Colombian head coach Pekerman will have until June 4 to trim his squad to 23. Colombia begins their FIFA World Cup 2018 campaign against Japan on June 19 followed by Poland on June 24 and Senegal on June 28 in the remaining league-stage matches.

(The above story first appeared on LatestLY on May 17, 2018 08:43 PM IST. For more news and updates on politics, world, sports, entertainment and lifestyle, log on to our website latestly.com).