Barcelona star footballer Lionel Messi and the USA World Cup winner Megan Rapinoe has been crowned player of the year in The Best FIFA Football Awards in the year 2019. The event was held at Teatro alla Scala in Milan, Italy. The Argentina forward player bagged his 6th Fifa title, which enabled him to create record holder ahead of an absent Cristiano Ronaldo, who has won five. 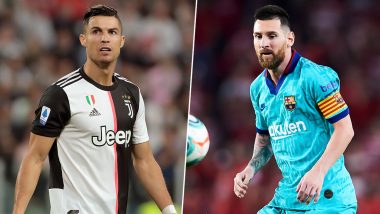 Barcelona football star Lionel Messi and Megan Rapinoe, co-captain of the US National team that won FIFA Women's World Cup 2019 bagged top honours at the Best FIFA Football Awards. The event was held at Teatro alla Scala in Milan, Italy. The Argentina forward player bagged the award in absence of Cristiano Ronaldo.  Meanwhile, Cristiano Ronaldo fans have not accepted the result and have reacted on Twitter where they have trolled Messi. Let us see some of the funny twitter reaction below. Lionel Messi Wins FIFA Men's Player of the Year Award as Cristiano Ronaldo Skips Ceremony, Megan Rapinoe Bags Women's Honour; Check Full Winners' List

Had to do it! #Messi pic.twitter.com/9nt22wTsnR

FIFA President: The winner of The Best Men Player of the Year isssssss Lionel Messi

Leo Messi: Walking up to the stage to accept his award

Messi and an accomplice picking up the FIFA player of the year award. pic.twitter.com/fMuWpF5Jje

Ronaldo fans writing paragraphs as to why Messi didn't deserve this awardpic.twitter.com/Lx8uMjkWQ9

(The above story first appeared on LatestLY on Sep 24, 2019 10:21 AM IST. For more news and updates on politics, world, sports, entertainment and lifestyle, log on to our website latestly.com).