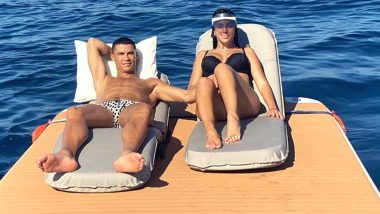 After the conclusion an unusual and demanding season Cristiano Ronaldo is enjoying some well-deserved rest with girlfriend Georgina Rodriguez. The Portuguese star’s footballing campaign came to an unexpected and early and after Italian giants, Juventus were knocked out of the Champions League in the round of 16 by French side Olympique Lyon on Friday (August 7, 2020). Cristiano Ronaldo, Partner Georgina Rodriguez Relax on a Luxury Yacht During Vacation in Portofino (View Family Pics).

Cristiano Ronaldo’s girlfriend Georgina Rodriguez shared a cute photo of the couple which she captioned ‘C❤G’. In the pic, the Juventus star could be seen letting his hair down after a gruelling footballing season as he went sunbathing with his model girlfriend. Cristiano Ronaldo Lets His Hair Down on Yacht With Family, Fans Swim Across to Get a Glimpse of Juventus Star (Watch Video).

The 35-year-old footballer was brilliant in the game against Lyon as he scored a brace in 2-1 win but was unable to lead Juventus to the next round as the Italian champions were knocked out on the basis of the away goals rule as they lost the first leg 1-0 in February.

However, despite of the disappointment on the European stage, Cristiano Ronaldo enjoyed a fine domestic campaign leading Juventus to a straight ninth successive Serie A title. The five-time Ballon d’Or winner scored 31 league goals this season, finishing second in the Italian league’s top-scorer charts.

There are doubts over Cristiano Ronaldo’s future at Juventus as reports suggest that he is unhappy with the team’s performances and could move to Paris Saint Germain in the summer. But, Juventus club president is confident that the 35-year-old will continue with the Italian giants next season.

(The above story first appeared on LatestLY on Aug 09, 2020 07:15 PM IST. For more news and updates on politics, world, sports, entertainment and lifestyle, log on to our website latestly.com).