Cristiano Ronaldo Lets His Hair Down on Yacht With Family, Fans Swim Across to Get a Glimpse of Juventus Star (Watch Video) 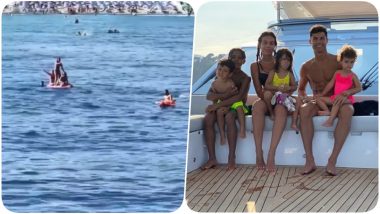 Fans swim across to get a glimpse of Cristiano Ronaldo (Photo Credits: Instagram)

Cristiano Ronaldo played a vital role in helping Juventus win their ninth Serie A title. Post which he immediately went for a holiday with his family in his yacht. No sooner he boarded the yacht while celebrating his win with his girlfriend Georgina Rodriguez and four kids a few fans swam across the sea only to get a glimpse of the Juventus star.  Georgina shared the video of the fans singing songs to the couple on social media. For a while now, the matches have been conducted behind closed doors in the absence of the fans. Cristiano Ronaldo to be Rested For Remaining Serie A 2019-20 Season: Reports.

Thus they are surely missing out on the opportunity to celebrate the Serie A win with the stars. Thus these fans went an extra mile and swam across to get the glimpse of the Juventus star. As soon as Georgina shared the video of the fans on social media, it started going viral and was further shared by the fans. You can check out the pictures and video below:

Talking about CR7, it is very likely that the five-time Ballon d'Or winner might not feature in the match against Cagliari keeping in mind the Champions League matches which will begin from August 8, 2020.

(The above story first appeared on LatestLY on Jul 29, 2020 08:32 PM IST. For more news and updates on politics, world, sports, entertainment and lifestyle, log on to our website latestly.com).