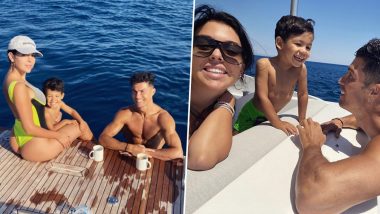 Cristiano Ronaldo is certainly enjoying his life in Italy. The Portuguese superstar spent his Monday holidaying in a fishing village in Genoa after helping Juventus draw against Atlanta with two penalty goals and maintain their eight-point lead at the top of the Serie A 2019-20 points table. Ronaldo, his partner Georgina Rodriguez and their children enjoyed some time together relaxing and spending some lovely family moments aboard a luxury yacht in Portofino. The Portuguese and Georgina later took to social media to share some pictures from the trip. Cristiano Ronaldo Wowed by Girlfriend Georgina Rodriguez, Calls Her ‘Most Beautiful Woman on Earth’.

Ronaldo, Georgina and their son Mateo could be seen relaxing in the yacht in some stunning pictures shared the couple. Ronaldo was flaunting his chiselled body and abs while Georgina looked gorgeous in a neon green swimsuit with a thong cut and a cap to go with the swimsuit. “Relaxing and lovely moments,” Ronaldo captioned the image on Instagram. Cristiano Ronaldo, Georgina Rodriguez Engaged? CR7’s Girlfriend Flashes Ring in Her Latest Instagram Post (View Photo).

Georgina too shared some lovely pictures from the getaway. In the pictures shared by her, Ronaldo’s son Mateo can be seen relaxing beside them. Georgina is also posing in sunglasses in the pictures as she smiles into the camera. “Where life begins and love never ends,” she captioned the series of images.

The couple has been sharing some lovely pictures from every trip they make in Italy. Last week, Ronaldo shared a picture of himself relaxing under the sun showing-off his toned physique as he lay in black and gold shorts.

His partner, Georgina posed in a leopard print bikini and a sun-hat in a sizzling posy while in another she posed in a stunning black bikini as she emerged from the water while relaxing in the yacht.

Georgina in a Sizzling Pose

Meanwhile, Ronaldo has been in fine form ever since Serie A 2019-20 resumed last month. The Portuguese has scored in six successive league games and is just one goal behind Lazio’s Ciro Immobile in the Serie A golden boot race. He has 28 goals in the league this season and will certainly add more with Juventus still having six games to play in the campaign.

(The above story first appeared on LatestLY on Jul 14, 2020 11:18 AM IST. For more news and updates on politics, world, sports, entertainment and lifestyle, log on to our website latestly.com).