Cristiano Ronaldo Misses Out on FA Cup 2021-22 Match Against Aston Villa, Ralf Rangnick Says ‘Nothing Serious About His Injury’ 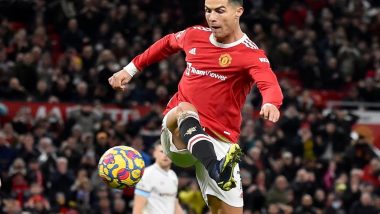 Amid rumours of moving away from Manchester United, Cristiano Ronaldo missed out on the FA Cup 2021-22 match against Aston Villa held last night. The match was held at Old Trafford where the home team secured a win. Now, Manchester United manager Ralf Rangnick has spoken about his injury and said that there is nothing to worry about. The manager revealed that he spoke to the Portugal star before the match and Ronaldo pointed out that there has been some problem with him for the past two days. Ralf Rangnik further said that there's nothing serious about his injury. Scott McTominay Scores for Manchester United as Red Devils Seal 1-0 Win Over Aston Villa in FA Cup 2021-22 Match.

The manager explained that it doesn't make sense to take any risks and thus decided to bench him. “Minor problems, but in the end, we decided that it made more sense to not take any risks in a game that could easily last 120 minutes, so we just decided to rest him. He had some problems with his hip, with his hip muscle. I don’t think it’s anything serious," he said after the game. Manchester United registered a 1-0 win over Aston Villa in the FA Cup 2021-22 match. It was Scott McTominay who was the lone goalscorer last night as he netted a goal at the 8th minute of the match.

Manchester United has now proceeded into the next round of the FA Cup 2021-22. The team had lined up in the 4-2-3-1 formation. Coming back to Cristiano Ranaldo, it would be interesting to see how his upcoming days are placed with the Red Devils.

(The above story first appeared on LatestLY on Jan 11, 2022 10:26 AM IST. For more news and updates on politics, world, sports, entertainment and lifestyle, log on to our website latestly.com).