Denmark Squad for 2018 FIFA World Cup in Russia: Lineup, Team Details, Road to Qualification & Players to Watch Out for in Football WC

Denmark have announced their preliminary 35-man world cup squad for Russia, so let’s take a look at team line-up, their road to qualification and players to watch for in WC 2018. 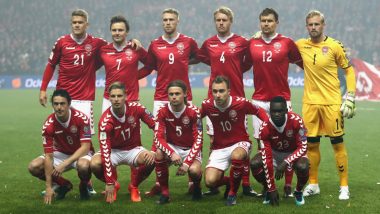 After a hiatus of six years and having missed two major tournaments, Denmark is back to the international fold with a place in the 2018 FIFA World Cup. The national side will be keen to do well although their national side has been mediocre at best for many years now. But this team has shown character during the worst of time and when people had written them off even surprising many by qualifying for FIFA World Cup 2018 in Russia and the credit for this amazing unity of the team goes to their coach, veteran Age Hareide. Since taking over the reins in 2016, he has seen his side grow and made them play to their potential for a change. Denmark have announced their preliminary 35-man world cup squad for Russia, so let’s take a look at team line-up, their road to qualification and players to watch for in WC 2018. FIFA World Cup 2018 Schedule in IST for PDF Download: Fixtures, Groups, Time Table with Match Timings & Venue Details of Football WC in Russia.

Their defense has quite a few good names Simon Kjaer, Jannik Vestergaard, Andreas Christensen and Mathias Jorgensen who are plying their trade in the big leagues. There is also an upcoming talent in Andreas Bjelland who plays in the English second tier with Brentford but has managed to dislodge big names in the starting eleven. Leicester City keeper Kasper Schmeichel is the Danish no 1 and can take inspiration from his father, the legendary Peter Schmeichel in performing at such big stages.

Their midfield has two names that have had a very fruitful season in Thomas Delaney and Cristian Eriksen. Thomas Delaney, in particular, will be hoping to continue his fine form he has had with Werder Bremen in Russia to eventually find suitors for him post the World Cup. Their striking department lacks experience with only Nicklas Bendtner a known figure as he hopes to add to his 81 caps with Denmark.

Denmark were placed in Group E of the UEFA World Cup 2018 qualifiers and finished second behind Poland with 20 points to set up a play-off clash with the Republic of Ireland. Although they failed to score at home in the first leg of the play-off and were held to a 0-0 draw, they didn't lose hope. In the second leg in Dublin, trailing to a Shane Duffy goal, Denmark produced an astonishing fightback to claim a 1-5 victory with Christian Eriksen bagging a famous hat-trick.

Denmark was not a part of FIFA World Cup 2014 in Brazil.

Christian Eriksen: He is a type of player that gets the fan excited and has a tremendous following in England with Tottenham Hotspurs. With the level of consistency at display week in week out, Eriksen has quickly established himself as Demark’s golden boy. He will be given the task of getting the goals for his side as he can score and set up goals with ease. He is, in fact, one of the main reasons this team is heading to Russia.

Thomas Delaney: He has a host of top clubs monitoring his each and every move and his calming presence as a defensive midfielder for Werder Bremen this season is the main reason for it. He also scored 3 and set up 4 goals, which is quite impressive for a CDM. A perfect World Cup in Russia and he could be counting a lot of cash the next season.

Denmark will be facing Peru in their opening game of FIFA World Cup 2018 on June 16. It will be followed by two more group-stage matches, vs. Australia on June 21 and vs. France on June 26. Ahead of their World Cup campaign, Denmark will play Mexico as a warm-up friendly match on June 9 at Brondby Stadium, Brondby.

(The above story first appeared on LatestLY on May 19, 2018 10:30 PM IST. For more news and updates on politics, world, sports, entertainment and lifestyle, log on to our website latestly.com).