Diego Maradona Passes Away at 60: A Look At The Best Moments in Argentine Great's Footballing Career

Argentina legend and 1986 World Cup winner Diego Maradona has passed away after suffering a cardiac arrest at the age of 60 according to multiple reports. The former football star suffered a heart attack at his home just two weeks after leaving the hospital where he underwent surgery on a blot clot in his brain. 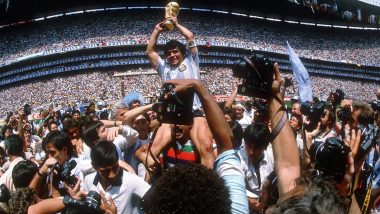 Argentina legend and 1986 World Cup winner Diego Maradona has passed away after suffering a cardiac arrest at the age of 60 according to multiple reports. The former football star suffered a heart attack at his home just two weeks after leaving the hospital where he underwent surgery on a blot clot in his brain. Here we take a look at some of the best moments of Diego Maradona's illustrious footballing career.

Earlier, in November, the Argentina footballing great had undergone surgery for a brain clot. "This chronic subdural hematoma was successfully evacuated," said the doctor, Leopoldo Luque, in a statement. "Diego tolerated the surgery very well. He is awake. Everything is fine." Pictures of his fans flooding the streets to wish for his quick recovery had gone viral. Sadly, the legend is no more and leaves a giant void in the sporting world. Here are some of the best moments of his career.

The Hand of God

The most infamous goal in world football was scored none other than the greatest player to ever play the game. In the quarter-finals of the 1986 World Cup, Diego Maradona netted a goal with his hand which he described as it was scored ‘with a little of Maradona and a little of the Hand of God’.

The Goal of the Century

In the same game where Diego Maradona scored the most controversial goal, the diminutive Argentine went on to score arguably the greatest goal ever. The Argentina winger dribbled past almost the entire England defence including the keeper to pass the ball in an unguarded net. This strike is described in world football as ‘The Goal of the Century’

The Argentina captain led his country to a second World Cup in three years, which many believe he did on his own and have dubbed that as the single greatest campaign in World Cup history. The final against West Germany was frustrating for Maradona but he needed just a second to make a difference finding some space and executing a perfect pass to create Argentina's late third in a 3-2 win.

Diego Maradona's spell at Barcelona may not be his most successful one but it was definitely a memorable one. During an El Clasico clash at rivals Real Madrid’s stadium, the Argentine scored a sensational goal – dribbling the keeper and sitting down a defender – which left the Los Blancos fans in awe of the player. It was the defining moment of the game for Maradona, who left the field to a rare standing ovation from Real fans.

A footballer from the slums of Argentina became a god in Naples. Diego Maradona joined Napoli in the late 1980s and a country which was dominated by AC Milan and Juventus, the Argentine established Napoli as a superpower. Maradona led a relegation-threatened team to a league and cup double in 1987 and to another league title in 1990. Napoli fans held funerals for their rival clubs, announcing the dawn of a new era by painting murals of Maradona all over the city.

(The above story first appeared on LatestLY on Nov 25, 2020 10:34 PM IST. For more news and updates on politics, world, sports, entertainment and lifestyle, log on to our website latestly.com).