Argentina football legend and icon Diego Maradona has passed away at age of 60 after suffering a cardiac arrest on Wednesday. Maradona had recently undergone a brain surgery to remove a blood clot. He was widely celebrated as one of the greatest ever footballers to have played the game and led Argentina to a World Cup victory in 1986. 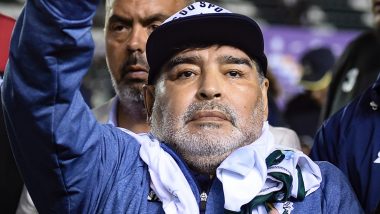 Football icon and Argentina legend Diego Maradona has passed away at age of 60 after suffering a cardiac arrest on Wednesday (November 25). Maradona had recently undergone a brain surgery to remove a blood clot. He has been admitted to the hospital on October 30 after falling unconscious at a local football club during his birthday celebration. He had been, however, released from the hospital on November 11 after undergoing successful surgery. But just two weeks after being released from the hospital, the football great suffered a heart attack in his home and sadly passed away.

Maradona was widely celebrated as one of the greatest ever footballers to have played the game. He led Argentina to a World Cup victory in 1986. Maradona was also a legend at Barcelona and Napoli. He led the Italian club to two Serie A titles, Coppa Italia, UEFA Cup and Supercopa Italiana during his seven-year spell at the club.

He was named as one of the two winners of FIFA Player of the 20th Century award. Nicknamed, El Pibede Oro, Maradona impressed and won fans with his vision, control of the ball and dribbling skills. Maradona spelt magic with the ball and was one of the greatest ever to have played the game.

Maradona started with Argentinos Juniors before moving to Boca Juniors. Maradona burst into the limelight at Boca Juniors and soon moved to Europe after Barcelona signed him. But off-field incidents at Barcelona saw him move to Italy where he joined Napoli and led the club to their first Serie A title. He won a total of five trophies with the Serie A club.

Maradona had been struggling with his health of late and had recently been rushed to the hospital after falling ill at his birthday celebration at the Gimnasia de La  Plata football club. He had to later undergo surgery but had been released after 10 days and was doing well before his untimely demise.

(The above story first appeared on LatestLY on Nov 25, 2020 10:13 PM IST. For more news and updates on politics, world, sports, entertainment and lifestyle, log on to our website latestly.com).