England vs Denmark, UEFA Euro 2020 Semi-Final Live Streaming Online & Match Time in IST: How to Get Live Telecast of ENG vs DEN on TV & Free Football Score Updates in India

England vs Denmark Euro 2020 semi-final match will be played on July 08, 2021 (Wednesday mid-night) at the Wembley Stadium in London. The match is scheduled to start at 12:30 am IST (Indian Standard Time). 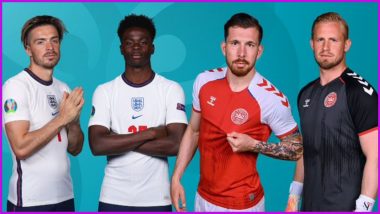 England and Denmark meet in the second semi-final of the UEFA Euro 2020. Italy have already qualified for the final after defeating Spain on penalties and now awaits winner of England vs Denmark. Meanwhile, if you are looking for England vs Denmark Euro 2020 semi final clash live online streaming and live TV telecast in India then continue reading. Euro 2020: Why Italy Are Firm Favourites To Win European Championship.

England will be playing in front of the home crowd but one thing that will be bothering them is that in last six competitive matches against Denmark they have been able to win just one and that too came in 2002 during the World Cup. However, at the Wembley Stadium England leads the head-to-head record against Denmark with five wins in seven games.

England vs Denmark Euro 2020 semi-final match will be played on July 08, 2021 (Wednesday mid-night) at the Wembley Stadium in London. The match is scheduled to start at 12:30 am IST (Indian Standard Time).

Sony Pictures Networks India is the official broadcaster of UEFA EURO 2020 in India. It will telecast England vs Denmark semi final live match on Sony Ten 2 in English, Sony Ten 3 in Hindi, Sony Ten 4 in Tamil and Telugu, Sony Six in Bengali and Malayalam.

(The above story first appeared on LatestLY on Jul 07, 2021 09:14 PM IST. For more news and updates on politics, world, sports, entertainment and lifestyle, log on to our website latestly.com).