Euro 2020: Why Italy Are Firm Favourites To Win European Championship

Italy are on a redemption path ever since they lost out on a spot in the 2018 World Cup and they have found an able leader in Roberto Mancini to help them reclaim European glory. 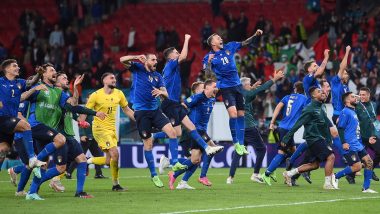 Unbeaten for 33 matches. Fourth Euro final. A beautiful mix of youth and experience and hands down, favourites for winning the title. Roberto Mancini has transformed his side into a literally winning machine and there seems to be doing everything perfectly. Gianluigi Buffon had broken into tears when Italy had failed to make it to the 2018 World Cup but now, their redemption story is almost done. They have once again proven to Europe and the world that why they are considered to be one of the finest to ever play the game of football. Yes, Gigi Buffon might not be part of this side today, but he can surely be proud of how far this team has come. Italy Book a Spot in Finals of Euro 2020, Beat Spain 4-2 on Penalties

Italy have been unstoppable in their run to the final so far. Mancini's men have become the team to beat but no side has really been able to achieve this feat in Euro 2020 so far. Their performance against Spain spoke a lot about how resilient they have become and how difficult they are to be defeated. Here are three reasons why they are favourites to win Euro 2020:

1) Team spirit: France has Kylian Mbappe, Portugal has Cristiano Ronaldo and Belgium has Romelu Lukaku, Eden Hazard and Kevin De Bruyne. But this hasn't been the case with this Italy team. As a matter of fact, Leonardo Bonucci, one of Italy's most senior players said this, "We don't have players like Ronaldo or Lukaku. Our star is the group." And he was right. There hasn't been any one or two players who have carried this team on their back. When they step out in the field, all XI players commit themselves to bring their best game forward to honour the bagde on their jerseys. The team setup is such that every player enjoys being part of it, feels responsible towards the team and also understands how they have to help their teammates out.

2) Strong defence: A strong defensive unit is always an added bonus to a team which has loads of potential in their midfield and attack. Led by the highly experienced duo of Bonucci and Giorgio Chielleni, they are always very strong at the back and that has been seen in this tournament. Adding to it, they have a world-class young goalkeeper in Gianluigi Donnarumma. He is just 22 years old but the maturity he possesses is immense and no wonder, he has been such an integral part of Mancini's plan. His performances have proven why Italy might not miss Buffon's services.

3) Mancini magic: When Roberto Mancini was appointed Italy head coach in 2018, they had failed to qualify for the World Cup for the first time in 60 years and the team was in a complete mess. At a press conference, he had said his intention was to, "take Italy to the top of the world." And boy did he keep his word. Blending a team that have a good mix of youth and experience, Mancini made every member feel they were part of his project to reinstate glory back to Italian football. The callups of Sandro Tonali and Nicolo Zaniolo, who hadn't made their Serie A debuts, were called up to the squad. Yes, his first major competition, the Nations League saw Italy lose to Portugal, the eventual winners, but they haven't lost ever since. Under Mancini, this team has found a way, an identity and a desire to play for the badge.

Italy outclassed Spain in a thrilling semi-final in Euro 2020 on Wednesday. Their celebrations after the win showed what it meant to them. One opportunity to gain European glory, an opportunity to reclaim lost pride and be the kings of Europe.

(The above story first appeared on LatestLY on Jul 07, 2021 08:22 PM IST. For more news and updates on politics, world, sports, entertainment and lifestyle, log on to our website latestly.com).