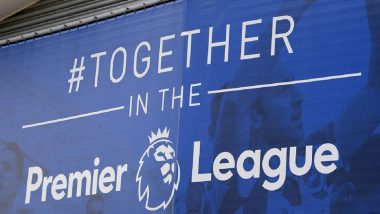 London, August 6: Premier League clubs on Thursday voted against using five substitutes in a game for the 2020/21 season. The 20 clubs that will play in the English top flight next season, including the newly promoted Leeds United, West Bromwich Albion and Fulham, met in a Premier League shareholders meeting where decisions were taken for the upcoming season which begins on September 12.

The clubs will hence revert to using three substitutes for next seasons with seven players allowed to be included on the bench. The clubs also voted to continue the usage of Video Assistant Referees (VAR) for the upcoming with full FIFA protocols. The on field referees will be encouraged to use the pitch-side monitors more often than they did this season specifically for decisions on goals, red cards and penalty kicks. 5 Substitutes Interim Rule in Soccer Extended by 1 Year.

There are no relaxations on the offside rule which means that marginal offside calls will continue to be taken. VAR will also advise for a penalty kick to be retaken if the goalkeeper saves it with his foot over the line. "If the goalkeeper is off his line and the ball hits the post or goes over, it won't be retaken unless the 'keeper has a material impact on the kick being missed," said the league.

Players will be adjudged to have encroached on a spot kick if "any part of the foot is on the penalty area or arc line it is encroachment. The player must still have a material impact on the outcome of the kick".

(The above story first appeared on LatestLY on Aug 06, 2020 10:46 PM IST. For more news and updates on politics, world, sports, entertainment and lifestyle, log on to our website latestly.com).