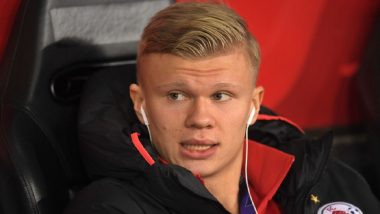 Erling Haaland has been in the news for breaking the records of Cristiano Ronaldo and Lionel Messi. But the last game against Bayern Munich brought in some bad news for the Norwegian player as he got injured during the game after a clash with the referee. He was even substituted in the last game. Now as per the report by Ruhr Nachrichten, he is all set to miss Dortmund’s next game against Paderborn which will be held on May 31, 2020, at Benteler-Arena. His injury has added to the woes of the squad. Erling Haaland Beats Lionel Messi and Cristiano Ronaldo in This Goals-per-Game Ratio, Check Stats of Norwegian Footballer.

Dan-Axel Zagadou has been out for the entire season and Marco Reus got a training injury, now with Erling Haaland getting injured, it will only add to the woes of the squad. For now, Emre Can and Jadon Sancho will also be looking to prove their fitness. The two are expected to return to the starting line-up for the game against Paderborn. The hosts might be at the bottom of the table, but  Dortmund will make sure to not take their opponents lightly.

Talking about the team, they stand on number two of the Bundesliga 2019-20 points table with 57 points in their kitty. The team has won 17 games out of 28 lost five and six of them ended with a draw. Bayern Munich stands on number one with 64 points. Robert Lewandowski's team has won 20 games out of 28 and four have ended in a draw and his team has lost an equal number of matches.

(The above story first appeared on LatestLY on May 28, 2020 01:51 PM IST. For more news and updates on politics, world, sports, entertainment and lifestyle, log on to our website latestly.com).