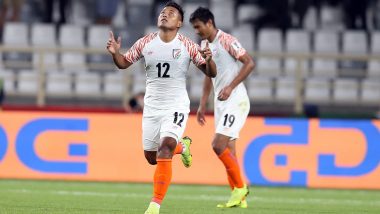 Jeje Lalpekhlua has become the third Indian football professional who has been recommended by the All India Football Federation (AIFF) for the famed Arjuna Award. Fellow international team-mate Sandesh Jhingan and women’s football player Bala Devi are the other two players whose names are forwarded by the governing body for the prestigious award. AIFF Nominate Sandesh Jhingan and Bala Devi for Arjuna Award.

According to a recent report from Goal, Jeje Lalpekhlua’s name was the latest addition to the initial list of players who were recommended for the Arjuna Award. The Mizoram-born footballer has been capped 53 times for the Indian national side and has scored 23 goals for the Blue Tigers. India Striker Jeje Lalpekhlua Donates Blood to Help During Covid-19 Crisis.

Jeje made his international debut in 2012 against Chinese Taipei and was crucial in the team’s SAFF Cup success in 2015 where he scored in the final against Afghanistan. He won the Best Young Player at the FPAI Indian Football Awards in 2011 and in 2016, he was awarded the Indian Player of the Year title.

The 29-year-old has achieved success in domestic competitions as well. Jeje is a two-time Indian Super League champion (2015 and 2018) with Chennaiyin FC and is altos the competitions second-highest Indian goal-scorer as well. Along with this, Jeje also won the 2014-15 I-League title with Mohun Bagan.

This is the third time that the footballer from Mizoram has been recommended for the award with the previous two occasions being in 2017 and 2019. But he was pepped both the time, first by Bem Bem Devi and then by Gurpreet Singh Sandhu.

(The above story first appeared on LatestLY on Jul 05, 2020 04:22 PM IST. For more news and updates on politics, world, sports, entertainment and lifestyle, log on to our website latestly.com).