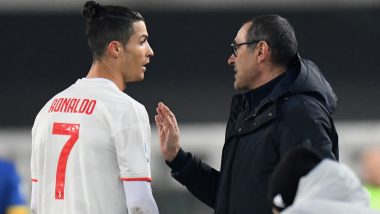 Juventus have sacked manager Maurizio Sarri following the team’s exit from UCL 2019-20 round of 16 stage. The Old Lady were defeated by French side Olympique Lyon on the basis of away goals rule as they the Italians won 2-1 at Allianz Arena yesterday but a 1-0 defeat in February ended the tie 2-2 on aggregate. After this loss, the 61-year-old manager was given his marching orders by the Bianconeri. Cristiano Ronaldo Nets 2 but Juventus Knocked Out of UEFA Champions League by Lyon.

Maurizio Sarri was appointed as Juventus boss at the start of the season replacing Massimiliano Allegri. But his first full season with the record Italian champions was far from what was expected of him which saw him being let-go by the club on August 8, 2020 (Saturday). Mauricio Pochettino Among Other Managers Lined Up As Possible Maurizio Sarri Replacements.

Maurizio Sarri won the Italian Serie A, his first-ever top-flight league title, but it was not enough as the team looked far from convincing on their way of lifting the ninth league crown in Italy. The defeat in the Coppa Italia final against Lazio post lockdown and a failure to make in mark in Europe proved fatal to the Italian manager.

‘The club would like to thank the coach for having written a new page in Juventus' history with the victory of the ninth-consecutive championship, the culmination of a personal journey that led him to climb all the divisions of Italian football.’ Juve said in an official statement.

And according to reports from news outlet Sportitalia, The Old Lady are looking at Mauricio Pochettino to take over the vacant spot. The Argentine manager last managed Tottenham Hotspur and took them to the first-ever Champions League final in the club's history.

But a poor start to this year’s Premier League campaign saw Pochettino being relieved of his duties and replaced by Jose Mourinho at Spurs. The Argentine manager has been without a club since and will be very happy to take the job at another European giant who is in a rebuilding phase.

(The above story first appeared on LatestLY on Aug 08, 2020 06:33 PM IST. For more news and updates on politics, world, sports, entertainment and lifestyle, log on to our website latestly.com).