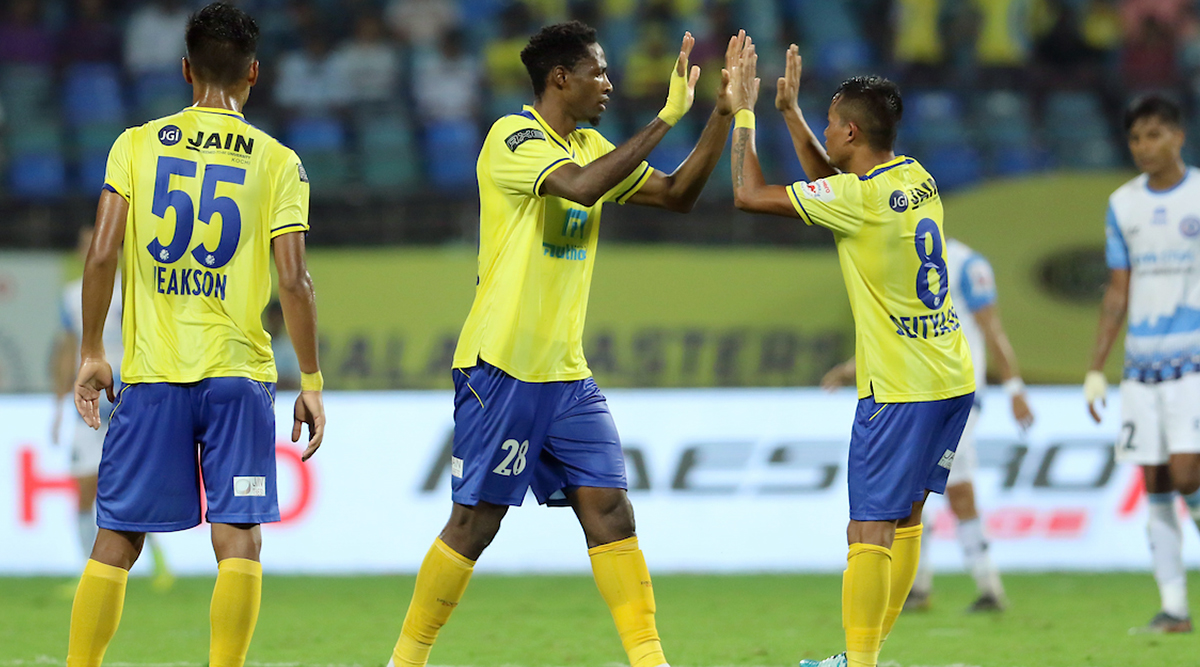 Kerala Blasters host NorthEast United in match 48 of the Indian Super League (ISL) 2019-20 with the hopes of ending their eight-match winless run. The match will be played at the Jawaharlal Nehru Stadium in Kochi on December 28, 2019 (Saturday). Eelco Schattorie’s side are in a rut as they are winless since the opening day of the competition and are in a dire need of a win. The two teams have met each other 10 times in ISL and in head-to-head records between Kerala Blasters and NorthEast United, KBFC have won five matches while NEUFC have three victories to their name. Two games have ended in a draw. In the last five meetings, Kerala Blasters have won three games to Highlanders one while one match has been drawn. Kerala Blasters FC Vs NorthEast United FC - Live Football Score.

NorthEast themselves are struggling at the moment as they are winless in the last four games. The Highlanders are unbeaten on the road but a poor home form has seen them slip to seventh in the table. They have lost their last two home games and will be looking to bounce back with a win against a struggling Kerala side. The defence has been a major concern for the Kochi based club as they have conceded 13 goals in nine games so far and with Sandesh Jhingan still out for a couple of months, Schattorie’s side need to find a way to tighten up their backline. Messi Bouli will be once again main threat from the home side and he will be a key player in deciding the outcome of this game. Ahead of this clash, we take a look at the results if the last five encounters between the two teams. KBFC vs NEUFC Dream11 Prediction in ISL 2019–20.

Kerala dominated the match but were not able to make their superiority count even after the away side playing with 10 men for almost three-quarters of the match as Gurwinder Singh was sent off in the 23rd minute. Pawan Singh in the Highlanders goal was the main reason why the scoreline remained 0-0 as he pulled off seven saves in the match.

The match exploded in the injury time as the Highlanders scored twice to come away with all three points. Matej Poplatnik opened the scoring in the 73rd minute of the game but Bartholomew Ogbeche brought the home side level in the third minute of the injury time. As the game was heading towards a draw Juan Mascia score with almost the last kick of the game to give the home side a win.

NorthEast United had the lion’s share of possession as well as more attempts in the match but were unable to make their dominance count. Wes Brown scored for the away side against the run of play in the first half and this was enough for the visitors to get all three points.

Both the teams were wasteful in front of the goal in this match as the sides managed a combined four efforts’ on target in the entire game. CK Vineeth opened the scoring in the first half for the home side and this was enough to get a win. Rehenesh Parambha was sent off just before half time for the visitors and it ended their chances of making a comeback.

Kerala had the majority of the possession in this match and in the end, their dominance told as CK Vineeth opened the scoring just past the hour mark. The Highlanders pushed hard for an equaliser but were not able to break down a resolute Kerala defence.