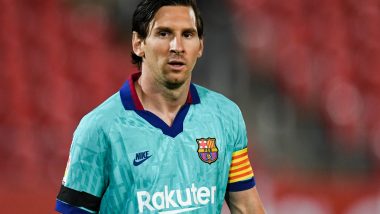 Despite Barcelona’s evident struggles, Lionel Messi has enjoyed a stellar individual campaign. The Catalan side's ‘Messi-dependency’ has seen the Argentine take his personal stats to a whole new level this season. The 33-year-old finished La Liga campaign as the league’s highest goal-scorer and assist provider and if this wasn’t impressive enough, the Blaugrana captain broke a total of 11 records this campaign. Lionel Messi Records: A Look at All Feats Accomplished by Barcelona Star in La Liga 2019–20 Season.

Lionel Messi was not able to inspire a lacklustre Barcelona side to La Liga title this year as Real Madrid won the prestigious trophy for 34th time in their history. However, there was no stopping the Argentine on an individual basis as the 33-year-old broke records left, right and centre. Most Goals in 2020: Cristiano Ronaldo Leads Scoring Chart; Lionel Messi Outside Top Three.

Lionel Messi has not enjoyed the best of relationships with Barcelona hierarchy this season, but that has not him distracted from his job on the field. So we take a look at the 11 records, the Argentine superstar has broken this season.

2. Most Assists in La Liga

3. Goals and Assist in La Liga

With 25 goals and 22 Assists in this La Liga season, Lionel Messi became the first player in La Liga history to reach the 20-figure mark in both goals and assists.

4. Player of the Month

Lionel Messi has been consistent over the years and this season he took his individual Player of the Month Award tally to seven, which is the most in La Liga history.

The Argentine once again crossed the 20-gaol mark in La Liga this season and in doing so became the first play in La Liga history to score 20 or more goals for 12 consecutive seasons.

Lionel Messi is not only one of the greatest goal-scorers of all time but is also one of the finest playmakers of his generation. This season, the Argentine became the first play to be involved in 1000 official goals, no other player has managed this feat until now.

The Argentine racked up his 500th win this season, in doing so he became the first football player in Spanish history to achieve this feat.

The Argentine took on Real Madrid for the 43rd time in his footballing career. No other player in Barcelona history have faced their arch-rivals more time than Lionel Messi.

After netting against Slavia Prague in October, Lionel Messi became the first player to score in 15 consecutive Champions League seasons.

Borrusia Dortmund became the 34th team that Lionel Messi has scored against in UEFA Champions League. No other player in competitions history has managed to against more clubs than the Argentine superstar.

(The above story first appeared on LatestLY on Jul 24, 2020 01:52 PM IST. For more news and updates on politics, world, sports, entertainment and lifestyle, log on to our website latestly.com).