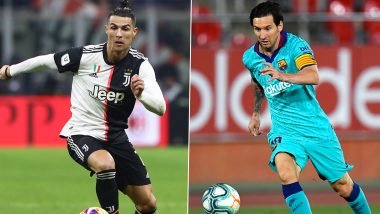 2020 has been a weird year for football admirers all around the world. With the sport, temporarily being halted amid the coronavirus pandemic, doubts were raised if the current season would be declared null and void. But it wasn’t the case, as several top footballing leagues returned to action and fans once again got to see their favourite players back in action. And no other footballer has enjoyed the sports’ return more than Cristiano Ronaldo. Cristiano Ronaldo Records: Milestones and Feats Accomplished by the Juventus Star After His Brace Against Lazio in Serie A 2019–20.

The Portuguese superstar has scored 10 goals in nine games post lockdown and has been one of the driving factors behind Juventus, who are on course to secure their ninth consecutive Serie A title. In fact, the five-time Ballon d’Or winner is having a stellar year in total as he has scored more goals than any other football player since the turn of the decade. Lionel Messi Records: A Look at All Feats Accomplished by Barcelona Star in La Liga 2019–20 Season.

The 35-year-old’s eternal rival Lionel Messi, who also had brilliant camping, fails to make it into the top three top-scorer for the year. Bayern Munich star Robert Lewandowski is second on the list while Dortmund’s January signing Erling Haaland is third. So in this article, we take a look at 2020s top 10 goal-scorers for club and country.

The PSG striker has been one of the most consistent players in the world for a few years now and 2020 was no exception. In 14 games, Mbappe has scored 12 goals and will get a chance to add to that once the Parisians return for the Champions League campaign.

The Belgian joined Inter Milan in the summer for Manchester United and has been an instant hit at the club. The 27-year-old’s 13 goals in 21 games in 2020 has helped the Italian club to climb to third in Serie A and secure Champions League football for next season.

The Portuguese might be the most surprising player in the list but his goals have been very much crucial for Frankfurt in the latter half of the season. The 24-year-old 13 goals in 21 games helped his club to survive yet another year in Bundesliga and move to ninth in the table.

The youngest has burst onto the scene this season and has been linked with several European heavyweights such as Chelsea and Bayern Munich. The 21-year-old has scored 14 goals in 22 games with majority of them coming post lockdown.

The Italian is enjoying a barrel form in front of the goal since football’s return from coronavirus enforced suspension. Hos dip in form has directly resulted in Lazio losing ground in Serie A title challenge. Despite his recent struggles, Immobile has still scored 14 goals in 19 games this year.

The Slovenian internationals’ form since the turn of the year has seen Atalanta climb to second in Serie A and remain in the title picture with three games left in the season. The 32-year-old has scored 14 goals in 16 games in 2020.

Despite Barcelona’s struggles, the Argentine has enjoyed a fine individual campaign. The 33-year-old has scored 15 goals in 25 games this season, which are far off his regular standards but he has made up for it in terms of assists. The Barcelona captain will bet a chance to add to his tally during the Champions League camping.

The Norwegian arrived at Borussia Dortmund in Aviary and took the world by storm with his goal-scoring prowess. The 20-year-old has scored 16 goals in 18 games this year, which helped the Yellow & Backs to finfish second in the German league.

The Polish forward is the highest goal-scorer in the 2019-02 footballing season with 51 goals to his name in just 41 games. Since the turn of the year, he has netted 21 times in 18 games and will get a chance to improve that tally when Bayern Munich continue their UCL campaign.

The Portuguese’s form sin 2020 has been one of the main reasons why Juventus are still at the top of Serie A table. The 35-year-old has scored 22 times in 21 games and with four league games and Champions League campaign still to be played, the five-time Ballon d’Or is clearly the favourite to end the year as top-scorer.

(The above story first appeared on LatestLY on Jul 23, 2020 06:36 PM IST. For more news and updates on politics, world, sports, entertainment and lifestyle, log on to our website latestly.com).