The Premier League defending champions have a good opportunity of going ahead in the title race should they win tonight. Wolves on the other hand, will draw inspiration from their performance against Chelsea in their last game. 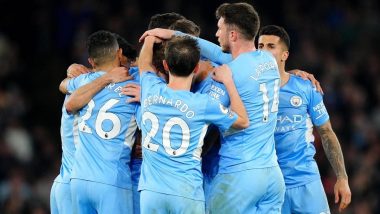 Manchester City would head one step up further in securing the Premier League 2021-22 title when they take on Wolves on Thursday, May 12. The match would be played at the Etihad Stadium and is set to start at 12:45 am IST (Indian Standard Time). Pep Guardiola's side find themselves in a strong position to fend off Liverpool's challenge and retain the Premier League title this season. Liverpool's draw against Tottenham Hotspur created the difference between both these teams involved in a heated title race. But Manchester City cannot afford to take Wolves lightly, especially with them churning out a point against Chelsea in their previous match. Erling Haaland Transfer News: Manchester City Confirm the Signing of Norwegian Striker From Borussia Dortmund

Guardiola would be quite wary of the opposition's ability to cause an upset and hence, will try and field his best XI for this game so that by the end, their difference with Liverpool on the points table increases. For Wolves, a win would help them push hard for the European football spots. Currently, they are eighth, five points short of West Ham at seven. Let us take a look at the live streaming and telecast details of the game.

The Manchester City vs Wolves Premier League 2021-22 match will be played at Etihad Stadium. The game will be held on May 12, 2022 (Thursday) and the match is scheduled to begin at 12:45 AM IST (Indian Standard Time).

Where to Get Live Telecast of Manchester City vs Wolves, Premier League 2021-22 Football Match?

How to Get Free Live Streaming of Manchester City vs Wolves, Premier League 2021-22 Football Match?

The game will also be available online for live streaming as well. As Star Network is the official broadcaster for Premier League in India, fans can watch the live streaming of the Manchester City vs Wolves match.

(The above story first appeared on LatestLY on May 11, 2022 04:38 PM IST. For more news and updates on politics, world, sports, entertainment and lifestyle, log on to our website latestly.com).