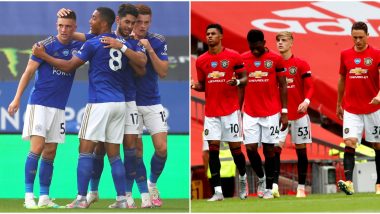 Manchester United and Leicester City will face each other in a Champions League deciding clash at the King Power Stadium on Sunday. The Manchester United vs Leicester City will also be the final Premier League 2019-20 match for both teams and they will hope an end their league campaign with a victory. Both teams are chasing a top-four finish, which will guarantee Champions League football for next season. United are currently placed third and can finish in the top-four if they avoid a defeat while Leicester are in a must-win situation. Leicester City vs Manchester United, Premier League 2019–20: Mason Greenwood, Jamie Vardy and Other Players to Watch Out.

Incidentally, Leicester City have won only one of their last 13 Premier League home matches against United. Their final home league win against United came 5-3 in 2014 since then they have lost eight and drawn eight games. But Leicester are unbeaten in their last five league matches at home while United, until the restart, did not have an impressive away record. But since the restart, Ole Gunnar Solskjaer’s side have won three of their four away games. EPL 2019-20 Final Standings: Rating Manchester United, Chelsea and Leicester City’s Premier League Top 4 Finish.

Meanwhile, with a big final day game coming up fans of both teams have got excited and can’t wait to see their team come out blazing to a win and seal their Champions League berth. Take a look at some twitter reactions from anxious fans of both Manchester United and Leicester City.

Manchester United and Leicester when they hear Chelsea is down by two goals 🤝#LEIMUN pic.twitter.com/4QMRau8omu

Dear Man.united defenders, as you play today, please don't let us attract curses to ourselves 🙏, Defend like you're playing to win a cup, our attackers please secure a win today, UCL is a must next szn, Thank you.

#mufc Going into this season, many said we had a weaker midfield than Wolves, Spurs, Chelsea and Leicester... We also failed to replace Lukaku and Sanchez.

Thanks to Ole, we have developed our players into a mid/att better than those teams above.

The Calculation and Possibilities

Every Manchester United, Chelsea, and Leicester city fan have automatically become good in Permutation. Mathematics is not as useless as we think after all.#LEIMUN #CHEWOL pic.twitter.com/L3CAaKu8vH

Lord please don't let Manchester United be unfortunate against Leicester today. Even if it's draw I will manage it #LEIMUN pic.twitter.com/XJAo3M7gpe

When Leicester and United Find Out Chelsea Are Losing

When the news comes that Chelsea are losing to Wolves.

Fans of Leicester and Manchester United When Losing

Me trying to avoid bants in a View Centre when my team is losing #LEIMUN #CHEWOL pic.twitter.com/iFGNpfi0N7

Both Man United and Leicester Fans Ahead of Kick-Off

(The above story first appeared on LatestLY on Jul 26, 2020 07:47 PM IST. For more news and updates on politics, world, sports, entertainment and lifestyle, log on to our website latestly.com).