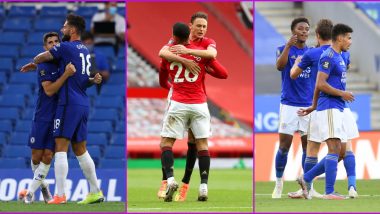 The English Premier League is hugely popular around the world owing to its stiff competition and fast-paced football. Time and again we have seen the championship decided on the last day of the season or the relegation battle going down to the wire. This year in the COVID-19 hit campaign, the top 4 race in England boils down to the final day. Manchester United, Chelsea and Leicester City are the key participants in this battle with each club having their European destiny in their own hands. Ahead of the last round of games, we analyse the chances of these three clubs as they get ready for the battle. Premier League 2020-21 Season to Begin on September 12.

Manchester United – The Red Devils under Ole Gunnar Solskjaer have shown tremendous resolve post the COVID-19 break with an unbeaten run in the league. They were miles behind Leicester City at one stage, but a combination of Foxes failing along with their own superior performances mean they start this evening third in the table. Yet, problems with lack of depth in the squad has exposed Manchester United’s management issues once again. Every time the Red Devils have had a chance to go clear of their rivals in the Champions League race, they falter. Players like Bruno Fernandes and Paul Pogba look burnt out which spells further trouble. Lack of a quality full-back like Luke Shaw, who misses through injury is another blow ahead of the game.

VERDICT – Manchester United will lose against Leicester City to crash out of the EPL Top 4 standings.

Leicester City – In an ideal scenario, Leicester City should not need a win in their last game to qualify for next season’s Champions League but the Foxes have choked badly. A poor run of results in June sees them drop to 5th in the points table. Yet despite the misfortunes, a win this evening against a slightly jaded Manchester United squad will see them make it to Europe. They have quality attackers in Jamie Vardy and Ayoze Perez that can stretch the United backline. Youri Tielemans is a slick passer of the ball and can run rings around the Red Devils in midfield.

VERDICT – Leicester City at home will be a confident outfit and can provide the sucker punch to Manchester United.

Chelsea – Frank Lampard’s Chelsea, a young team with quality youth players along with some fine experienced individuals should be proud of the fact that they are in the top 4 race when no one gave them a chance at the start of the season. They have Wolves at Stamford Bridge which is a tricky contest. They will like to focus on getting their job done rather than one eye on the other results. Wolves are good at defending and even better at breaks, but Chelsea should manage a point from the contest simply because they are playing at home.

VERDICT – Chelsea should get through to Europe with a point and can peacefully work on their recruitments next season.

So Chelsea and Leicester City are our picks to finish in the Champions League standings as we approach the final day bonanza.

(The above story first appeared on LatestLY on Jul 26, 2020 02:42 PM IST. For more news and updates on politics, world, sports, entertainment and lifestyle, log on to our website latestly.com).