Leicester City vs Manchester United, Premier League 2019–20: Mason Greenwood, Jamie Vardy and Other Players to Watch Out in LEI vs MUN Football Match

Leicester City can only qualify for the Champions League with a win or if Chelsea lose to Wolves and hold United to a draw. Incidentally, Leicester have beaten United only once in their last 13 Premier League matches at home against the Red Devils. They were beaten 0-1 by United in the reverse fixture early in the season. 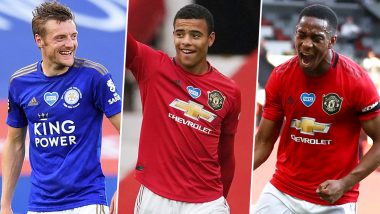 Leicester City can only qualify for the Champions League with a win or if Chelsea lose to Wolves and hold United to a draw. Incidentally, though Leicester have beaten United only once in their last 13 Premier League matches at home against the Red Devils. They were beaten 0-1 by United in the reverse fixture early in the season and have won just two of their last five games, which includes a 0-3 thrashing by Tottenham Hotspur in their penultimate EPL game. Leicester City vs Manchester United, Premier League 2019-20 Free Live Streaming Online & Match Time in India.

Brendan Rodgers’ side are also missing few key players in James Maddison and Ben Chilwell, who are out for the season with injuries while Ricardo Pereira, Christian Fuchs and Daniel Amartey are also sidelined. Centre-back Caglar Soyuncu is serving the final of his three-match ban. United have two injury concerns. But Luke Shaw, who has missed last three matches with an ankle problem, could be fit to start while Eric Bailey seemed okay. Take a look at some key players for LEI vs MUN EPL clash.

Vardy is the favourite for the Premier League Golden Boot this season and leads the goalscoring chart with 23 goals to his name. He is already two goals clear of second-placed Danny Ings and will hope to seal the top-place with a goal or two against United. Vardy, who was in great form at the start of the season, has managed only four goals in his last eight matches and needs to find his scoring boots if Leicester are to win.

Young Greenwood is the least fancied player among United’s famed front-three. But in recent matches, the 18-year-old has looked United’s best forward. He scored the leveller in the 1-1 draw at home against West Ham. He is already United’s highest-scoring teenager in a single season. Greenwood will be the player to watch out for against a makeshift Leicester defence. He has already netted 10 times in the league this season.

Leicester’s right-sided centre-back was all over the place against Tottenham Hotspur and failed to match himself against the pace of Son Heung-Min and Harry Kane. Bennett was withdrawn at half-time against Tottenham with Leicester shifting to a back four in the second half. There is doubt if he will start, but Rodgers has gone with a three centre-backs in the last few matches and Bennett should start in the back-three again. He will have plenty against Marcus Rashford, Anthony Martial and Greenwood.

Martial has scored six times in his last seven appearances in the Premier League. The Frenchman has looked dangerous every time he has the ball at his feet. Against West Ham, though, Martial looked tired and worn out. Coach Ole Gunnar Solskjaer will hope he is fresh for Leicester and is firing again. Martial has scored 17 times in the league this season and has 22 goals across all competitions. He will be key if United are to beat Leicester on Sunday.

The Portuguese has been the best player in the Premier League since his debut for United in February. He has found the net seven times and has assisted as many goals in just 13 Premier League appearances. Fernandes has been key to most goals United have scored since his arrival in England but has looked tired and sluggish in the last couple of matches. He missed a great opportunity to score against West Ham and guilty of a couple of wayward passes.

(The above story first appeared on LatestLY on Jul 26, 2020 06:47 PM IST. For more news and updates on politics, world, sports, entertainment and lifestyle, log on to our website latestly.com).