Manchester United vs Aston Villa match in FA Cup 2021-21 will be played at the Old Trafford on January 11, 2022 Tuesday. The match is scheduled to start at 01:25 am IST (Indian Standard Time). 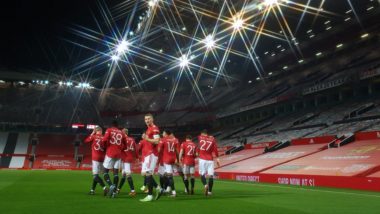 Manchester United, under fire after a 0-1 loss to Wolves in the league, shift their focus on Aston Villa in the third round of the FA Cup. A lot has been written in the media about the lack of unity in the squad and Ralf Rangnick’s inability to impress his stars with the tactics. While the players have come out to rubbish these rumours, another defeat at Old Trafford has the potential to take United’s torrid season to another low. The FA Cup represents an ideal opportunity for Manchester United to win some silverware and a strong team is expected to take field at Old Trafford. Opposition Aston Villa have looked solid under Steven Gerrard and they will be eager to get another win over Manchester United this campaign.  Karim Benzema Joins Cristiano Ronaldo, Raul Gonzalez in 300-Goal Club After Scoring a Brace for Real Madrid Against Valencia in La Liga 2021-22 Match.

Victor Lindelof has trained with the first team which is a massive boost for the home team. He could pair with Raphael Varane in the backline. Scott McTominay was poor against Wolves but is set to start once again in midfield, this time alongside Fred. Marcus Rashford has not started the last few games and could be used for his pace on the counter. Bruno Fernandes needs to up his game if Manchester United are to progress from this tough encounter.

Former Manchester United skipper Ashley Young is a doubt for this game with a toe injury while Marvelous Nakamba is ruled out. Phillipe Coutinho is major signing for Aston Villa but has not had proper training at his new club to start a game of this magnitude. Douglas Luiz is the anchor man in midfield and United could once again fall short in this department.

Manchester United vs Aston Villa match in FA Cup 2021-21 will be played at the Old Trafford on January 11, 2022 Tuesday. The match is scheduled to start at 01:25 am IST (Indian Standard Time).

The match will also be available on online platforms. SonyLiv, the OTT of Sony Pictures Network, will be live streaming the Manchester United vs Aston Villa for its online fans in India. Manchester United are going through a rough patch and Aston Villa look the overwhelming favourite to move to the fourth round.

(The above story first appeared on LatestLY on Jan 10, 2022 05:17 PM IST. For more news and updates on politics, world, sports, entertainment and lifestyle, log on to our website latestly.com).